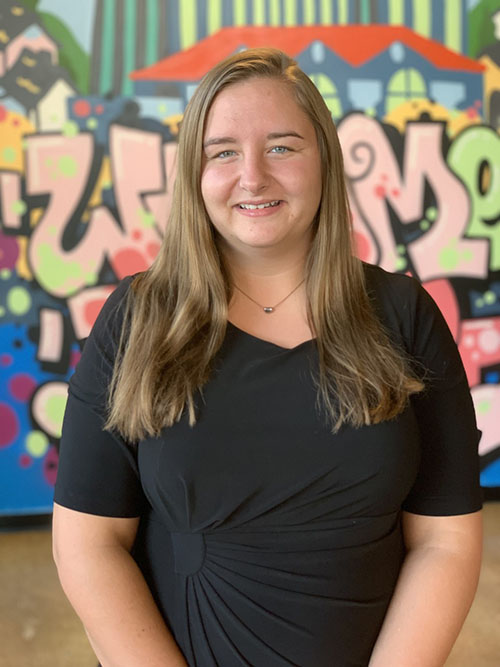 Kaitlyn Miklovich grew up about 75 miles outside of Detroit in the small town of Clifford, Mich. So when she announced she was going to attend University of Detroit Mercy, it raised some eyebrows.

“My mom was really, really worried about me coming to school in Detroit,” Miklovich said. “But after a while, my parents came around. When they would visit, we would go on Sunday drives through the city and we were able to see small changes that were having a big impact on the city. Detroit has that drive to become something better than they were before.”

Miklovich wants to be part of that future. She was recently selected to participate Challenge Detroit, and will spend a year helping to revitalize the city with her talents.

She learned about the Challenge Detroit program, which aims to develop diverse, innovative, community-minded leaders from around the city and the country. Through Challenge Detroit, participants use their skills and work in teams to support projects that better Detroit.

“The whole program drew me in. The idea that I’m able to work in a city, but also make a difference in the city at the same time and not have the two interfere, but instead work with each other was really appealing,” said Miklovich. “My theory is that no one can fix Detroit in a day. We need to have little impacts that add up.”

Through the program, Miklovich, an architecture school graduate, can put into use what she learned in school and what she’s learned on the job to help further Detroit.

“There is a two-month period of training where we meet on Fridays. I have a host company and I work there Monday through Thursday and spend the Fridays in training with Challenge Detroit,” she said. “We have several five- to six-week long projects that we work on in groups, and one that we come up with on our own.”

The first project partner is Detroit Public Schools Community District. The Challenge Detroit team has been given a direction and a challenge theme and the members will come up with a plan and solution. Miklovich said it could be a physical item or a plan for the organization to implement.

“The one requirement that Challenge Detroit has to become a fellow is that you must have a bachelor’s degree,” said Miklovich. Her bachelor’s and master’s degrees from Detroit Mercy in architecture are rooted in experiences from her past.

Miklovich said her father was hands-on in her upbringing and it was his influence that led her toward architecture.

“My dad taught me a love of history and placemaking,” she said. “When I see a historic building, I wonder what happened on that front porch, and really connect the people to the place and history to the place.” Those interests led Miklovich to Detroit Mercy’s acclaimed School of Architecture.

While there, Miklovich was active with the American Institute of Architecture Students, the student division of the American Institute of Architects. She also studied abroad in Warsaw, Poland in 2017. As a student, she worked in budget and finance and university services, where she learned about the school, the operations and service to the community. Miklovich also volunteered for Rx for Reading and painted three Little Free Libraries for the area.

“I had never been to a religious school; I had always been in public schools. Being Jesuit-educated was new to me,” she said. “The biggest thing it taught me was that it’s important to be men and women for others, to volunteer and not make it about yourself. That’s the Challenge of Detroit mission as well. I feel like I follow a very similar mission.”

Currently, Miklovich’s host company for Challenge Detroit is Mosher Dolan in Royal Oak, where she works as a construction advisor. She said she is growing as an architect and learning a lot from the tasks she does every day. While Miklovich doesn’t know exactly what the future holds for her, she knows that with her education, her experience with Mosher Dolan and Challenge Detroit, her opportunities are endless.

“The things that I’ve seen in the past couple of months show me that there isn’t one straight path out there for me,” Miklovich said. “I could use my degree in a way I didn’t think I would. There are all types of things going around me that I could get involved in.”