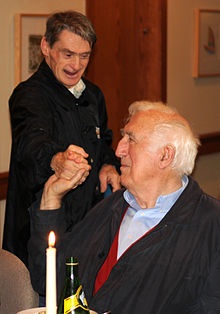 Jean Vanier is 86 now, the son of the 19th Governor General of Canada. He served with the Royal Navy and the Royal Canadian Navy during World War II and received a PhD in philosophy at the Institute Catholicque de Paris in the 1950s, a distinguished but so unusual a career path. In 1964, however, he invited Raphael Simi and Philippe Seux, two men institutionalized for mental disability, to leave their institutions and live with him in a little house in Trosly-Breuil, France. So began his life work as the founder and mentor of the now world-wide L’Arche movement. Today c. 150 L’Arche communities operate in c. 40 countries world wide. Every community is made up of people with disabilities, and those who assist them. They live together in homes and apartments, sharing life with one another and building community as responsible adults.

Vanier is a heroic figure with a challenging world view, namely, that every human being is beautiful when experienced at close range, and that the simple act of living with a full array of human beings at close range can create an astonishing healing presence in the world. Sitting on a shelf near where I pray in the mornings, along with books of poetry, is Jean Vanier: Essential Writings (Orbis). Some days I browse and pause to read. Here’s something I found today, the conclusion of a short talk titled “Love Your Enemies: Transform History.”

“I am not saying that a man intent on killing will always cave in before nonviolence. There are so many different kinds of people with different forms of violence in them. All I know is that if a violent person is treated like a human being rather than a wild animal, there is a chance that he will respond like a human being.”

One way to describe the calling of UDM might be: “an institution committed to treating every human being — students, faculty, staff, admininstrators, and people who share our urban space — like human beings.” Sounds simple but there’s a lot to it.