Feb 26 – “an inescapable network of mutuality”

February nears its end.  At UDM, this month has seen a remarkable array of events organized by a group lead by Dorothy Stewart (Student Affairs). The group chose Martin Luther King Jr’s expression “Beloved Community” for its theme.  The M&I listserve has taken part in these events by dedicating Wednesday posts to “Beloved Community” texts.   We have also used the Thursday post to put a light on the poetry of Dudley Randall in this 100th anniversary year of his birth.

Today’s post from MLK’s “Letter from Birmingham City Jail” and February guest-editor Professor Rosemary Weatherston’s Dudley Randall posts tomorrow and Friday complete what has been a first for the M&I list, a thematic thread running through an entire month.  I want to thank Dorothy Stewart and her committee and Professor Weatherston  for enriching M&I’s February  by connecting with the “Beloved Community” campus-wide effort and by helping celebrate Dudley Randall, whose work as a UofD librarian resulted in our Library being named a National Literary Landmark.    More about Dudley Randall tomorrow.

“We are caught in an inescapable network of mutuality, tied in a single garment of destiny. Whatever affects one directly, affects all indirectly.”

p.s.    I’ve followed the MLK text with a couple paragraphs from Wikipedia and a photo of the MLK statue on the Mall

The Birmingham Campaign began on April 3, 1963, with coordinated marches and sit-ins against racism and racial segregation inBirmingham, Alabama. The non-violent campaign was coordinated by Alabama Christian Movement for Human Rights and King’sSouthern Christian Leadership Conference. On April 10, Circuit Judge W. A. Jenkins issued a blanket injunction against “parading, demonstrating, boycotting, trespassing and picketing”. Leaders of the campaign announced they would disobey the ruling.[1] On April 12, King was roughly arrested with Ralph Abernathy, Fred Shuttlesworth and other marchers—while thousands of African Americans dressed for Good Friday looked on.[2]

King met with unusually harsh conditions in the Birmingham jail.[3] An ally smuggled in a newspaper from April 12, which contained “A Call for Unity“: a statement made by eight white Alabama clergymen against King and his methods.[2] The letter provoked King and he began to write a response on the newspaper itself. King writes in Why We Can’t Wait: “Begun on the margins of the newspaper in which the statement appeared while I was in jail, the letter was continued on scraps of writing paper supplied by a friendly black trusty, and concluded on a pad my attorneys were eventually permitted to leave me.”[4]

A 1999 study found that the essay was highly anthologized in that it was reprinted 50 times in 325 editions of 58 readers published between 1964 and 1996 that were intended for use in college-levelcomposition courses.[14] 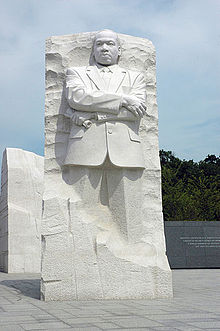