They say the city set a record this early morning,  11º;  early sun on the most delicate traceries of snow can take your breath away if the biting unseasonal cold didn’t already do that when you stepped outside.  The McNichols Faculty Union officers and the UDM administration will sign a contract at 2:00 this afternoon.  Like winter, negotiations felt endless and burdensome.  A spring day like today, leading off with a shock of cold weather and a blaze of sunrise reminds us of hopes of things to come,  leaves and flowers and grass waking up, and baseball as well.   May the sheer beauty of the work all of us come here to do, beauty of our commitments, bring a spring of freshness to our work place too.  The thing about a long winter is that it makes me long for spring and makes Spring feel like a miracle of rebirth.

In yesterday’s Detroit News on line, right next to the monthly interactive map of the city’s deadliest crimes, appears a story about Lance Swain,  a man on his way to work, on the Lodge yesterday.     When I read it late last night it made me glad to live among people who do things like he did.  So today, instead of a poem, a story about a Detroit man on his way to work.

Good Samaritan pulls people from Detroit crash, says ‘that’s what a man does’

For the second time in about a month, the Detroit resident has helped rescue victims of rollover crashes on area roads. The latest occurred shortly before 1 p.m. Tuesday as Swain was returning from lunch.

“I was driving down the Lodge near Howard Street and I saw a Jeep on its side,” said Swain, who works for Detroit City Connect, a non-profit agency that helpsDetroit area non-profits and the government to work together to solve local problems.

“I pulled up close and asked a bystander if there was anyone inside and he said, ‘Yeah, two people.’ I left my car so I could helpget them out of there.”

According to Swain, the victims were two women who were more or less dangling from their seat belts.

“They were conscious but shook up pretty bad,” said Swain, the married father of a 5-year-old daughter and a nearly 2-year-old son. “We got the passenger side door open, and I slid inside. The first lady was the passenger, and I had to undo her seat belt and then I pulled her out.

“But the driver’s foot was stuck and she couldn’t stand up so I couldn’t get her out.”

Pinned and panicky, the driver told Swain she was scared and that her chest hurt.

“I stayed with her; she was holding me,” Swain said. “I told her to breathe, gave her some water and put a scarf around her neck to keep her warm. When the paramedics arrived, they decided to remove her through the rear hatch of the Jeep.”

Swain let down the seats and helped the paramedics remove the woman.

And then he went back to his job at City Connect.

“The funny thing is the same sort of thing happened about a month ago on Grand River,” Swain said. “We were coming back from the Black History Museum and there was a car that had been hit and was on its side. My cousin and I hopped out and did pretty much the same thing for the two people who were inside.

“So when this crash happened on the Lodge it was pretty much like, ‘Let me out of my car and get to work.’ ”

Swain demurs when anyone suggests that he might be a hero. 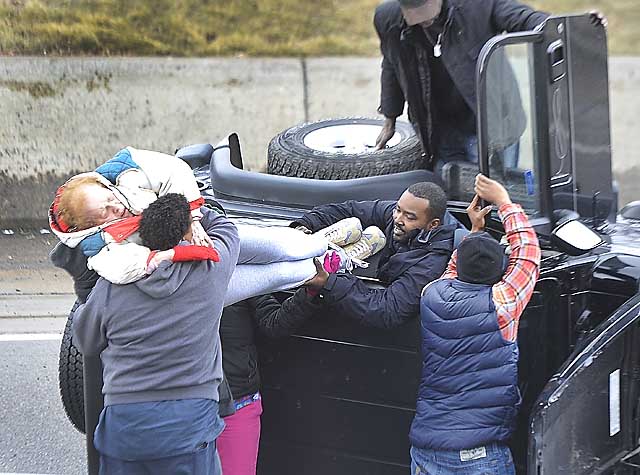