First Monday of Advent November 30 –  “Companion is the one who eats the same bread.”

Yesterday morning when I opened the blinds in my room, snow traceries on the courtyard cloister walk roofs took my breath away.   A few minutes later I remembered that Advent begins today.   Because of Advent, and the move from Advent into Christmas and the turning of the year, and because of the coming of winter, these days begin my favorite of the 12 months.

Here’s a look out my window over the courtyard a week ago after our 1st notable snow.  The window looks West so the rising sun is just peeking over the roof of our 3 story Jesuit house.   I leaned out my window to breathe and taste the air and my iPhone caught bands of light: high up = clean early dawn sun on the trees carrying the day-before’s snow;   middle = pale light on the lower branches and the roof of the community courtyard (which was built in 1926) and the courtyard itself is almost invisible because very little light was reaching it yet.   Sometimes Detroit is tough; sometimes it’s beautiful. 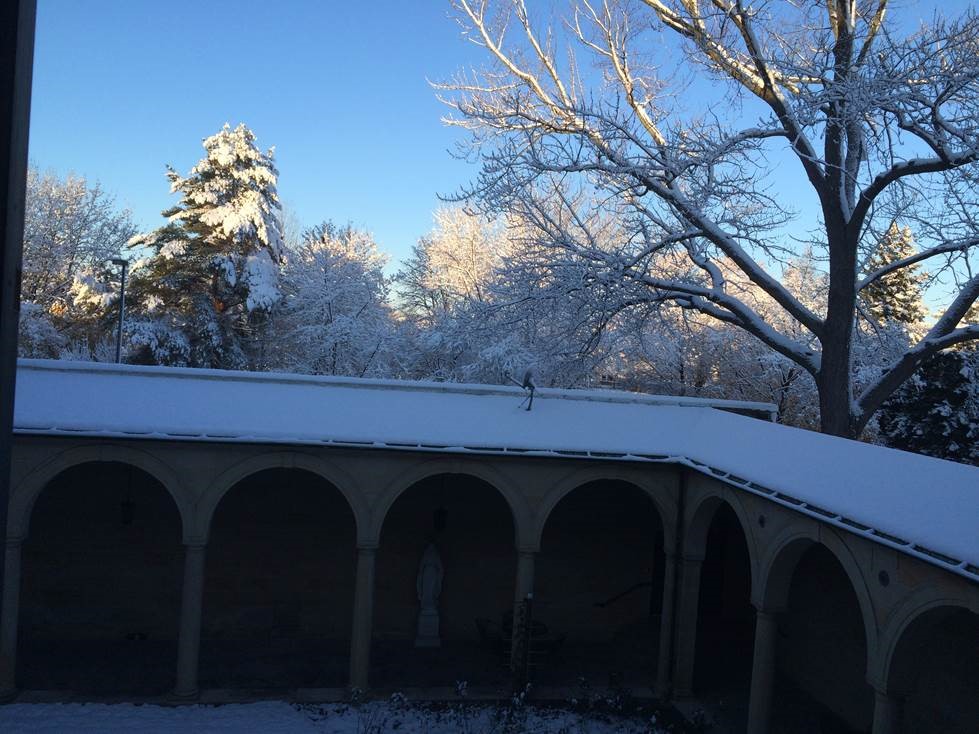 Have a blest work week.

p.s. Advent often reminds me of one of the saints in my life.  Here’s a meditation about Dom Helder Camera I wrote early in Advent two years ago.

Dom Helder Camera February 7, 1909, Fortaleza, Brazil – August 27, 1999.  He was archbishop of Recife and Olinda from 1964 to 1985 during military dictatorship in Brazil.  He interpreted Catholic teaching with a consistent, fierce attention to the violence of systems maintaining brutal poverty.  He made serious enemies.   It is said that some of them hired a hit man to remove him.  Like the professional he was, the hit man stalked Dom Helder for some time, learning his habits, seeking a place and time apt for killing.   In the process, he listened to him speak a number of times until, one day, he fell at Dom Helder’s feet, weeping, and begged for the grace to change his profession and his life.   When he walked this earth, Dom Helder’s presence engaged the world’s wounds.

This unblinking attention to the violence of poverty was matched by legendary playfulness.  Here is one story among many, this one I witnessed.  Once Dom Helder was speaking to about 1500 people who sat on the St. Louis levee overlooking the Mississippi River (by the Arch); in the middle of the talk, a helicopter took off right behind him filled with tourists taking a ride with a bird’s eye view of the river and the city.   It made enough of a racket that it was impossible to hear what the Dom Helder was saying.  He paused, turned around to the helicopter, and gave the tourists a puckish little wave.  When the helicopter got a little farther out on its trip, he turned back to us.

2 Responses to Nov 30 – Turning Toward Advent