Several weeks back The New York Times ran a piece on the 1924 Democratic National Convention.  When teaching US history, I found it helpful to single out 1924 as the meanest of the mean years that roamed the land in the wake of World War I, that brutal, demoralizing war.   Clumsy reconstructive surgery for veterans who did not die near the place of their wounds, marked their bodies life-long.  None worse, perhaps, than damage from the new chemistry, poison gas.  And for a young nation alive with bursting industrial achievement, exultant with liberating moral codes, (U.S. women won the right to vote in 1920.) the post war years woke anger and fear on many fronts.  Racism in the US reached one of its most intense boiling points.  The Ku Klux Klan peaked in numbers and influence in 1924; lynchings of African Americans peaked that year as well.

The Democratic National Convention played all this out in a way that makes this year’s GOP stump nastiness look tame; 103 votes to name a candidate, two evenly matched caucuses:  Irish Catholic Tammany Hall vs the Klan.  Violence was strategic and colorful:  fist fights, roosters released in the galleries, thrown chairs on the convention floor (http://www.nytimes.com/2016/03/16/nyregion/gop-path-recalls-democrats-convention-disaster-in-1924.html?_r=0)  —>  Read it; guaranteed to blow your mind.)

Such was the world in which Nobel Laureate Edna St. Vincent Millay wrote this hard poem. She lifts a line from Shakespeare’s Macbeth who understood that beauty in words carries hard edges and liberates the imagination (“Life in itself/ Is nothing,/An empty cup, a flight of uncarpeted stairs.”).  The poem can invite the reader to recognize human kinship with the mean and violent as well as the tender and kind.  “Out loud with pauses?”  Give it a try. Edna might hear our efforts to pay attention and be smiling.

p.s. Hard news notwithstanding, it is still opening day for Tigers baseball in Motown.

To what purpose, April, do you return again?
Beauty is not enough.
You can no longer quiet me with the redness
Of little leaves opening stickily.
I know what I know.
The sun is hot on my neck as I observe
The spikes of the crocus.
The smell of the earth is good
It is apparent that there is no death.
But what does that signify?
Not only under ground are the brains of men
Eaten by maggots
Life in itself
Is nothing,
An empty cup, a flight of uncarpeted stairs.
It is not enough that yearly, down this hill,
April
Comes like an idiot, babbling and strewing flowers. 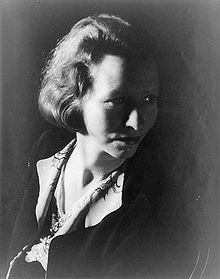