Friday May 6 – An obit for Dan Berrigan

Friday,  May 6
“ . . . a thin navy blue backpack, “light as a feather,” his niece Frida Berrigan said. He brought it everywhere.”

Perhaps it’s the time of night (late by my standards).  I find Jim Dwyer’s  New York Times obit for Dan Berrigan, who will be buried this morning in his city, eloquent, very moving.  Dwyer takes the reader into DB’s life through the experience of his niece, Frida Berrigan.  Less a poem than a contemplation and celebration and a goodbye.

Friday morning.   Have a blest weekend.

The Rev. Daniel J. Berrigan outside St. Patrick’s Cathedral in New York after leading an antiwar Mass on the sidewalk in 1972. CreditLibrado Romero/The New York Times

On his last day alive, the Rev. Daniel J. Berrigan wore pajama bottoms that had belonged to an older brother who died last year. In Father Berrigan’s closet was a thin navy blue backpack, “light as a feather,” his niece Frida Berrigan said. He brought it everywhere.

“Dan owned nothing,” Ms. Berrigan said on Thursday. “He carried nothing. Whenever I traveled with him, to conferences, speaking engagements, retreats, family occasions, he’d bring that little backpack of nothing. I’d pick him up and ask, ‘Is that all you have?’ He’d say: ‘Yes, that’s it. Let’s go.’”

Father Berrigan, a Jesuit priest who died last week at 94 and whose funeral will be held on Friday in New York, filled his life to the brim with poetry and protest, preaching and witness.

Deeds, not things, made Father Berrigan one of the best-known Roman Catholic priests of the 20th century: His physical possessions barely filled the modest room in the Jesuit infirmary at Fordham University in the Bronx where he spent his final years. He departed indifferently penniless from a world that often seems to keep score in gilded ink.

“My cousin Carla and I got married 15 years apart,” Ms. Berrigan said. “He wore the same shirt to both weddings.” Last week, five years after the second of those weddings, it was still hanging in the closet.

“He had two kinds of clothes: threadbare, translucent from wear, and things that he had never worn,” she said. “He had a shiny old black raincoat that he wore to every demonstration. Just Google the images of him.”

With his brother Philip and other Catholic peace activists, he led protests against the Vietnam War that were intended to shock. At Catonsville, Md., in 1968, the Berrigans and seven others walked into a draft board office, carried out armloads of records and burned them in the parking lot with homemade napalm. In 1980, Father Berrigan, Philip and others climbed into a General Electric plant in Pennsylvania and hammered at missile warheads, evoking the verse in the Book of Isaiah about a moment of revelation when people beat “their swords into plowshares and their spears into pruning hooks.”

In their early years of activism, the Berrigans and others of the Catholic left worked at the edges of the institutional church. They were a prophetic force. Since then, the church has become one of the world’s most consistent, prominent voices against wars. Into his late 80s and early 90s, Father Berrigan continued to speak from a distinctly Catholic perspective against war, capital punishment, abortion, bigotry and indifference to the poor. He also managed to keep being arrested.

When a network television reporter noted in 1981 that he was not getting as much attention as he once had, Father Berrigan replied, “I don’t think we ever felt our conscience was tied to the other end of a TV cord.”

Ms. Berrigan and others kept vigil with him in his room last week. As he became frail in recent years, she said, he was tenderly cared for by his brother Jesuits and the staff at the infirmary. By choice, he had no computer. The television was never on. Yet the space was not empty or quiet. “There were piles and piles of books,” she said. Visitors read to him.

On the walls were watercolors by the peace activist Elizabeth McAlister, the wife of his brother Philip; they are the parents of Ms. Berrigan. Father Berrigan once did a commercial for Ben & Jerry’s ice cream with other social activists, and occasionally boxes of stuff with logos would arrive. One item became a favorite: a red stocking cap with a goofy cow on the side. “It was like something a kid would wear,” Ms. Berrigan said. “He wore it all the time.”

After he drew his last breaths on Saturday, Ms. Berrigan said, they sat in his room. She opened mail for his birthday, May 9, and laughed at gimmick cards that chirped out songs. Those would have hit him on the silly bone, she said.

Father Berrigan drew inspiration from Dorothy Day, who helped found the Catholic Worker Movement in 1933 to bring fresh, radical life to the church’s teachings on social justice. Among other things, Catholic Worker communities across the country feed, clothe and shelter those in need.

On Friday morning, a march of peace will begin at 7:30 from Maryhouse, on Third Street between First and Second Avenues in Manhattan, one of two Catholic Worker homes in New York. It will go to the Church of St. Francis Xavier on West 16th Street, near the Avenue of the Americas, for Father Berrigan’s funeral Mass at 10.

During the offertory, which is part of every Catholic Mass, gifts of bread and wine are brought to the altar. When those offerings are blessed, Catholics believe, the bread and wine become the substance of the divine; when they are passed to the congregation, all can then eat and drink of the goodness of God.

At the Mass for Father Berrigan, in addition to bread and wine, other gifts will be brought to the altar. A plowshare. A hammer.

“And that shirt,” Ms. Berrigan said. “The one he wore to the weddings.”

An earlier version of this article, using information from family members, misidentified the birthday of the Rev. Daniel J. Berrigan. It is May 9, not May 7. 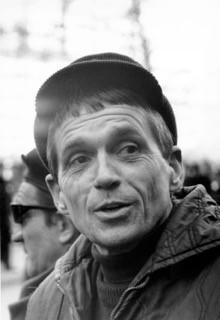