“I hear from my Inuit and Yupik relatives up north that
everything has changed.  It’s so hot; there is not enough
winter.
Animals are confused. Ice is melting.”

Poets who have come to inhabit my imagination since I began the Work Day/Hard Time poetry list in fall of 2013 .  .  .  , each carries her/his own voice, each voice so resonant and particular that on these Mondays, Wednesdays, and Fridays when I walk around among them all, one of them waits to surprise me.  Today is no exception to that rule.  Since we met in 1968 at The Institute of American Indian Arts in Santa Fe, Joy Harjo has never stopped surprising me.  This morning, with my ear tuned to so much grief and fearsome angers in the world, “Talking with the Sun” speaks of realism and deep down hope not unlike a favorite passage from Tolkein’s Lord of the Rings;  it speaks of improbable mirth in a hard time.  Treat it as a second poem perhaps, or as opening access to Today’s Post.

In the wizard’s face he saw at first only lines of care and sorrow;

though as he looked more intently

he perceived that under all there was a great joy:

a fountain of mirth enough to set a kingdom laughing

were it to gush forth.

I believe in the sun.
In the tangle of human failures of fear, greed, and
forgetfulness, the sun gives me clarity.
When explorers first encountered my people, they called us
heathens, sun worshippers.
They didn’t understand that the sun is a relative, and
illuminates our path on this earth.

After dancing all night in a circle we realize that we are a
part of a larger sense of stars and planets dancing with us
overhead.
When the sun rises at the apex of the ceremony, we are
renewed.
There is no mistaking this connection, though Walmart
might be just down the road.
Humans are vulnerable and rely on the kindnesses of the
earth and sun; we exist together in a sacred field of
meaning.

Our earth is shifting.  We can all see it.
I hear from my Inuit and Yupik relatives up north that
everything has changed.  It’s so hot; there is not enough
winter.
Animals are confused. Ice is melting.

The quantum physicists have it right; they are beginning to
think like Indians: everything is connected dynamically
at an intimate level.
When you remember this, then the current wobble of the
earth makes sense.  How much more oil can be drained,
Without replacement; without reciprocity?

I walked out of a hotel room just off Times Square at dawn
to find the sun.
It was the fourth morning since the birth of my fourth
granddaughter.
This was the morning I was to present her to the sun, as a
relative, as one of us.  It was still dark, overcast as I walked
through Times Square.
I stood beneath a twenty-first century totem pole of symbols
of multinational corporations, made of flash and neon.

The sun rose up over the city but I couldn’t see it amidst the
rain.
Though I was not at home, bundling up the baby to carry
her outside,
I carried this newborn girl within the cradleboard of my
heart.
I held her up and presented her to the sun, so she would be
recognized as a relative,
So that she won’t forget this connection, this promise,
So that we all remember, the sacredness of life. 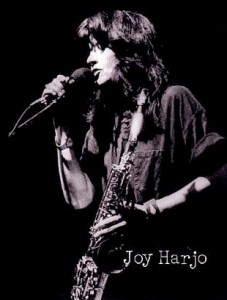