{a memory from 2014’s ceremonies}:   “In Dentistry many graduates are hooded by one or two or three of their kin who are already dentists; In Law three faculty have the hooding down to a rhythm. Even so, one tall grad knelt down as if to help the hooders reach over the top of his head, only to take an engagement ring out of his pocket and hold it out to one of those hooding;   he asked her to marry him. Saturday’s Baccalaureate Mass packed the Gesu Church. At the main campus commencement, the University first hooded Gerry Stockhausen, sj our immediate past president. His “Doctor of Humane Letters Honoris Causa” address was laced with wisdom and corny jokes. No one who had shared time with him at UDM was surprised. One UDM trustee, Brian Cloyd from Steelcase in Grand Rapids, told me how moved he was by the diversity of the main campus students as they walked to receive their diplomas. The whole human fabric, it seemed, showed itself; all of us were invited to pay attention to the beauty that we are.”

{Commencement days 2018}:  Lots of immediate work to dress campus at its best.  Lots of logistic work to get graduates dressed for the solemnity; get the music right, get hospitality ready for speakers and alums, plus this year managing lots of rain.  Also a masterpiece of family love as one of the graduates in the McAuley School of Nursing line was surprised by her brother in his Navy working uniform holding out a bouquet of flowers.  He had arranged a micro leave to give her the flowers and hold her in a long tender embrace before he hustled out of Caliban Hall to get back on duty.    Deep surprise and deep sibling love.

Today’s post has a name for this kind of paying attention; Mary Oliver calls it “Praying.”

It doesn’t have to be
the blue iris, it could be
weeds in a vacant lot, or a few
small stones; just
pay attention, then patch

a few words together and don’t try
to make them elaborate, this isn’t
a contest but the doorway

into thanks, and a silence in which
another voice may speak.

Something to catch my attention  – one flower undaunted by concrete
Front sidewalk of Lansing Reilly – July 20, 2008 – 8:31 am 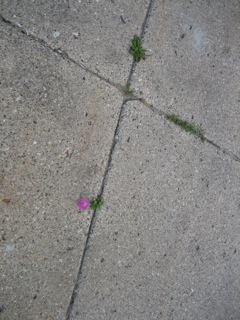 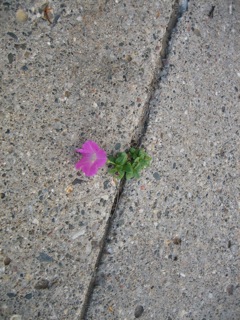