“If Grand River Were a River”

With thanks to Rosemary, here is her post from February 26, 2014, a poem by one of Detroit Mercy’s distinguished poet graduates, Al Ward.  Al writes about Grand River Blvd, the southern border of the University neighborhood.  Lots of familiar streets find their place in the poem.  Professor Weatherston explains why our university is home to a National Literary Landmark, a rare distinction nationally.  For the complete list see http://www.ala.org/united/products_services/literarylandmarks/landmarksbyauthor/landmarksbyauthor

Have a good week.  See you Friday.

This week students submitted their entries for UDM’s annual Dudley Randall Student Poetry Competition. The competition began while Randall was a librarian and poet-in-resident at U of D. He served as its judge for several years—one of the many ways he inspired our student writers.

Those of us who know Randall primarily through his poetry and reputation as a publisher may be unaware of this aspect of his legacy–his extraordinary generosity with and support of poets of all ages and walks of life. Broadside Press’s extensive work with community writers continues this legacy.

In today’s and tomorrow’s posts I would like to share the work of three talented University poets whose work has been supported by Randall and Broadside Press.

Today’s author, Albert M. Ward, is a University of Detroit alumnus and well-known Detroit poet, activist, and educator. He often speaks of the transformative effect it had on him as a young African American boy to visit Dudley Randall in the public library near his home where Randall worked.

In Ward’s poem, “If Grand River Were A River,” we can hear echoes of Randall’s love of our city. We hear, too, Ward’s own rich, powerful voice taking us somewhere new.

“If Grand River Were A River”

There are no waterfalls on Dexter
But when it rains
The street shimmers like glass
And Oakman Boulevard
Becomes a rainforest,

Blue and transparent
The sky over Dexter
Is bright in summer,
The sun washes the savannahs
And sidewalks in golden hues,
In a barbershop on Dexter
I learned to play checkers.

At Parkman Library
My bicycle was stolen.
Had my African warriors
Been with me,
We would have drummed
On our shields,
Walked through the tall grass
And found my bicycle.

Grandmothers would say,
“Carry these groceries, boys,
One day you’ll make fine young men.”
We’d walk Dexter sometimes
To Elmhurst or Fullerton
Or across Davidson to Clements
And Pasadena,
Had lots of friends on
Ewald Circle and Kendall.
The grandmothers would tell stories
And give us lots of fifty cents.

I remember that summer of “67,
43 people died they said,
A civil disturbance,
Businesses burned on 12th Street,
Houses in Pingree,
Tanks chewed up the alley
Behind the garage of my Aunt Sweet,
Looters running through her backyard
Terror, smoke and ashes,
Not to be denied . . .

Woodward and the boulevard, market place
Where villagers and neighbors come
To trade, to greet,
I see watercolours of silk
And broadcloths, women
With their bundles walking,
The Elders with their sticks.

Mt. Kilimanjaro is greater
Than the Fisher building
With snow like crystal,
Silver at its crest,
The sun sleeps there
When the moon is round and full,
East or west of Woodward . . . I am home.

If Grand River were a river,
Elephants could drink from it
And I would wash my clothes
Among its stones. 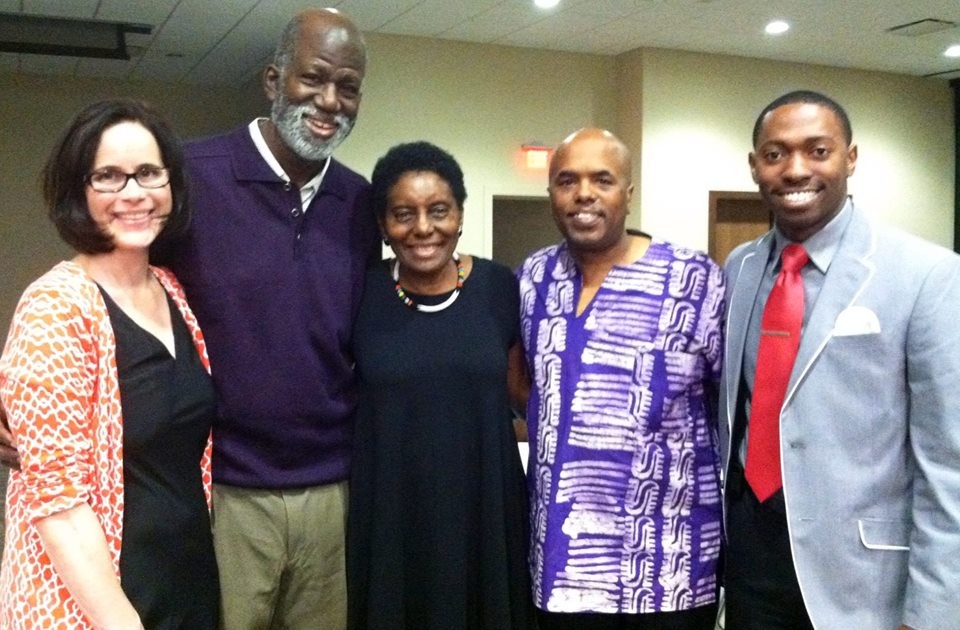 (Al Ward is second from the left, to the right of Professor Rosemary Weatherston.)
http://www.broadsidelotuspress.org/our-story