“Talking with the Sun” & “The high plains of Pine Ridge, SD”

This weekend’s early autumn sun & crisp air.  You can see by the way people walk around campus that breathing is easier these days.  Lots of smiles for this respite from late summer’s hot damp stretch.   For me, today’s morning stillness carries the tastes of the weekend in Detroit with Mary Tobacco, a soul friend of 50 years, who came to savor Detroit:  tastes of energy all over downtown; some great vegetarian food near the Art Museum just off Woodward;  letting the majestic power of the Detroit River offer us stillness and the company of all sorts of women and men and kids loving the sun; even, on Saturday some improbable whitecaps from autumn winds that ruffled our hair;   lots of young people on the new scooters that seem to be taking the country by storm.

Did we love the massive river more, or Belle Isle’s wedding cake fountain — now restored to its century old elegance — dancing in the late summer sun, inviting romantic pictures and joy-drenched laughter?  Mary lives on Pine Ridge, SD c. 300 miles east of the Rocky Mountains.  The “High Plains,” as that land is sometimes called, offers semi-arid, dry spells punctuated with spectacular hail and thunder storms, a land where one can look at the Black Hills, c. 70 miles away to the West and watch thunder storms sweep the prairie.  Time along the Detroit River and on Belle Isle offered Mary as much astonishing surprise as massive thunder storms on Pine Ridge astonish me.   I took this shot on June 19, 2010 about 4 miles from where Mary and her children live on a steep canyon slope. 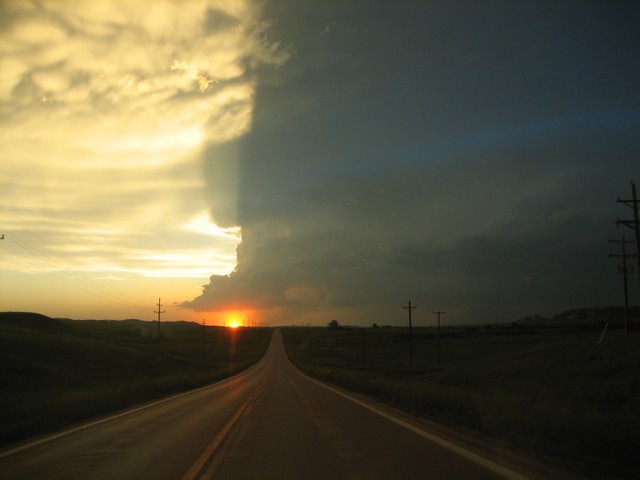 Mary, a Lakota,  is a friend of the Creek poet Joy Harjo.   They share a love of the land and sky, an intimate understanding of the beauty and the wearing fatigue of poverty so often marked with deep racism but also with the mystical surprises that close family ties offer.   This morning, I was listening for a voice I had not heard recently.   I found Joy Harjo, soul friend and strong poet.  Two years ago, she sent me a new book, Conflict Resolution for Holy Beings.   On September 2, 2016, I found my first poem there, “Talking with the Sun.”  How does a grandmother carry her fourth granddaughter out into the sun on a rainy New York Times Square morning?    You could read the poem with pauses.   Or you may imagine driving along that highway as the sunset shows off a front being pushed East by the storm’s energy.

P.S. Happy Mercy Day!  Mercy Day is the anniversary of the opening of the first “House of Mercy” in 1827 in Dublin, Ireland.

I believe in the sun.
In the tangle of human failures of fear, greed, and
forgetfulness, the sun gives me clarity.
When explorers first encountered my people, they called us
heathens, sun worshippers.
They didn’t understand that the sun is a relative, and
illuminates our path on this earth.

After dancing all night in a circle we realize that we are a
part of a larger sense of stars and planets dancing with us
overhead.
When the sun rises at the apex of the ceremony, we are
renewed.
There is no mistaking this connection, though Walmart
might be just down the road.
Humans are vulnerable and rely on the kindnesses of the
earth and sun; we exist together in a sacred field of
meaning.

Our earth is shifting.  We can all see it.
I hear from my Inuit and Yupik relatives up north that
everything has changed.  It’s so hot; there is not enough
winter.
Animals are confused. Ice is melting.

The quantum physicists have it right; they are beginning to
think like Indians: everything is connected dynamically
at an intimate level.
When you remember this, then the current wobble of the
earth makes sense.  How much more oil can be drained,
Without replacement; without reciprocity?

I walked out of a hotel room just off Times Square at dawn
to find the sun.
It was the fourth morning since the birth of my fourth
granddaughter.
This was the morning I was to present her to the sun, as a
relative, as one of us.  It was still dark, overcast as I walked
through Times Square.
I stood beneath a twenty-first century totem pole of symbols
of multinational corporations, made of flash and neon.

The sun rose up over the city but I couldn’t see it amidst the
rain.
Though I was not at home, bundling up the baby to carry
her outside,
I carried this newborn girl within the cradleboard of my
heart.
I held her up and presented her to the sun, so she would be
recognized as a relative,
So that she won’t forget this connection, this promise,
So that we all remember, the sacredness of life. 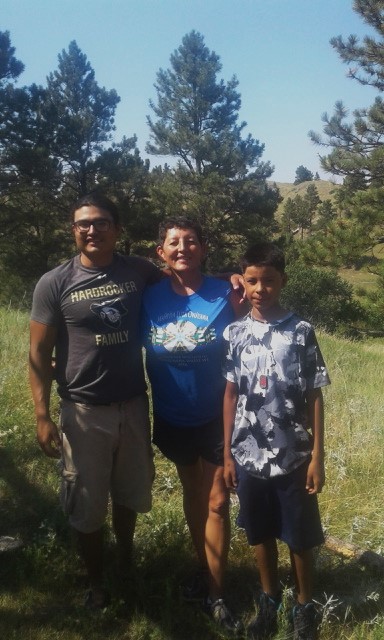 Mary with two of her children near her home in canyon country.