One of the list’s readers last year about this time responded to an all-time favorite autumn poem from Gerard Manley Hopkins – – who pretty regularly knocks me flat with wonder. The email contained John Keats’ early 19th century romantic poem without comment.  With Keats’ work, s/he reminded me as list readers often do, of a poet I had not noticed for a while. No scolding either, as in “how can you have overlooked Keats”!   Since then, Keats works on my imagination this time of year.  I’m in his debt for a near perfect read in times of mid-autumn blustering East/North East winds and rain.   Best to read “to autumn” out loud with pauses.

In Detroit, my home town, breezy sun laced with some handsome clouds all week long, a time to visit orchards and carry home fresh cider.   In Massachusetts,  my retreat days invite moments of stillness along with lots of bluster-winds enhanced by rain until Sunday, but stillness nonetheless.   Pine Ridge, which anointed me through September is cold this week.  John Keats writes of autumn from more than two centuries ago and from the other side of the Atlantic.  Worth reading outloud, with pauses.

Season of mists and mellow fruitfulness,
Close bosom-friend of the maturing sun;
Conspiring with him how to load and bless
With fruit the vines that round the thatch-eves run;
To bend with apples the moss’d cottage-trees,
And fill all fruit with ripeness to the core;
To swell the gourd, and plump the hazel shells
With a sweet kernel; to set budding more,
And still more, later flowers for the bees,
Until they think warm days will never cease,
For summer has o’er-brimm’d their clammy cells.

Who hath not seen thee oft amid thy store?
Sometimes whoever seeks abroad may find
Thee sitting careless on a granary floor,
Thy hair soft-lifted by the winnowing wind;
Or on a half-reap’d furrow sound asleep,
Drows’d with the fume of poppies, while thy hook
Spares the next swath and all its twined flowers:
And sometimes like a gleaner thou dost keep
Steady thy laden head across a brook;
Or by a cyder-press, with patient look,
Thou watchest the last oozings hours by hours.

Where are the songs of spring? Ay, Where are they?
Think not of them, thou hast thy music too,—
While barred clouds bloom the soft-dying day,
And touch the stubble-plains with rosy hue;
Then in a wailful choir the small gnats mourn
Among the river sallows, borne aloft
Or sinking as the light wind lives or dies;
And full-grown lambs loud bleat from hilly bourn;
Hedge-crickets sing; and now with treble soft
The red-breast whistles from a garden-croft;
And gathering swallows twitter in the skies. 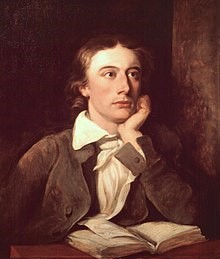