Monday of Week 2 of the Advent Season

Monday of Week 2 of the Advent Season
“Companion is the one who eats the same bread.” -Dom Helder Camera 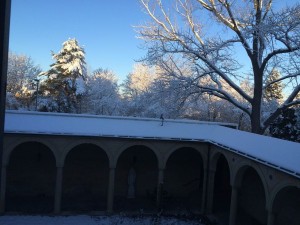 This show stopping photo was not taken this year; weather.com predicts a rain-drenched day, temps touching the 50s; so the view outside my window this year doesn’t take my breath away; just an ordinary work day.   This Monday, though, begins the second week of Advent, a season of outrageous promises mostly from Isaiah.  Advent’s prophets are meant to be read out loud, taken seriously, placed in tension with our gloomiest predictions of the mean world’s worst.   Here are some verses from Isaiah 35, the prophecy for the beginning of Advent’s second week.

“The desert and the parched land will be glad;
the wilderness will rejoice and blossom

Then will the eyes of the blind be opened
and the ears of the deaf unstopped.
Then will the lame leap like a deer,
and the mute tongue shout for joy.
Water will gush forth in the wilderness
and streams in the desert.
The burning sand will become a pool,
the thirsty ground bubbling springs.
In the haunts where jackals once lay,
grass and reeds and papyrus will grow.

Gladness and joy will overtake them,
and sorrow and sighing will flee away.”

The pic at the beginning of the post was taken four years ago on this same second Monday of Advent (December 9 that year).   Sometimes Detroit is gloomy; sometimes exquisite.  For more than 4 million people, metro Detroit is home no matter its weather.

Advent often reminds me of one of the saints in my life.  Here’s a meditation about Dom Helder Camera I wrote early in Advent some years ago.

Dom Helder Camera February 7, 1909, Fortaleza, Brazil – August 27, 1999.  He was archbishop of Recife and Olinda from 1964 to 1985 during military dictatorship in Brazil.  He interpreted Catholic teaching with a consistent, fierce attention to the violence of systems maintaining brutal poverty.  He made serious enemies.   It is said that some of them hired a hit man to remove him.  Like the professional he was, the hit man stalked Dom Helder for some time, learning his habits, seeking a place and time apt for killing.   In the process, he listened to him speak a number of times until, one day, he fell at Dom Helder’s feet, weeping, and begged for the grace to change his profession and his life.   When he walked this earth, Dom Helder’s presence engaged the world’s wounds.

This unblinking attention to the violence of poverty was matched by legendary playfulness.  Here is one story among many, this one I witnessed.  Once Dom Helder was speaking to about 1500 Sisters of St. Joseph who sat on the St. Louis levee overlooking the Mississippi River (by the Arch); in the middle of the talk, a helicopter took off right behind him filled with tourists taking a ride with a bird’s eye view of the river and the city.   It made enough racket that it was impossible to hear what the Dom Helder was saying.  He paused, turned around to the helicopter, and gave the tourists a puckish little wave.  When the helicopter got a little farther out on its trip, he turned back to us.

Have a blest work week.