We are 4 days out from the winter solstice (http://www.calendarpedia.com/when-is/winter-solstice.html).   But that’s for the future.  Now, deep into December’s winter,  is a time to treat long nights with respect (today: sunrise 7:56 am – sunset 5:01 pm).   Robert Frost writes about dim light more as an essential need than a grinding burden. When he calls the interruption of the night “more divine than any bulb or arc” he refers to arc lights and light bulbs.  Arc lights were the first economically feasible source of electrical-power-based artificial light.  Immensely bright, they hurt your eyes to look at and so were hard to manage.  Hard to breathe around them too because they gave off what people often called “noxious fumes.”  Back in 1875, though, people thought of them as the march of progress.

R Frost had another idea, as poets often do.  The O Antiphon sings of Adonai as Lord and Leader appearing in the fire of the burning bush of Moses in the Sinai.

Best to read the poem out loud,  with pauses.   Today’s early winter sky dawns with crystal clear sunshine and a medley of gusty winds and traces of cloud.  When the winter night’s dance arrives,  may its precious dark anoint you. 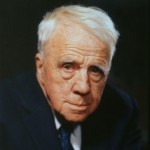