I have heard this thought expressed many times recently. It’s spoken with a conviction that words have done little to change things in desperate need of change. Words are empty or, worse, they are smokescreens used to cover over unforgivable deeds. And yet, when thinking today of Dr. Martin Luther King Jr., it seems impossible to separate the man of action from the man of words. I can’t envision the March on Washington for Jobs and Freedom without hearing in my mind the cadences of Dr. King’s Dream. I can’t read “Letter From Birmingham Jail” without recalling the narrow cell in which King was imprisoned when he wrote.

“Beloved community,” “a single garment of destiny,” “I have a dream”—these are words of inspiration. These are the first words my daughters will hear in their grade school assemblies this week. But they are words of challenge, too—to us, and for us. How are we to think of violence and nonviolence in the wake of Ferguson, or New York, or Southfield? “I am at war with myself / Having trouble finding the Martin in me,” reveals Obasi Davis, a young poet from Oakland, CA, “Too much anger / Not enough tolerance.”

And yet, today people are gathering to speak with one another. People will come together to remember, and wrestle with, and re-vision communities in which so much is in need of change. I think of Dr. King, and I am both confronted and inspired by the thought it might always take both words and deeds.

Wikipedia tells us that Rev. Thomas A. Dorsey (1899-1993) wrote “Precious Lord” in response to his inconsolable grief at the death of his wife, Nettie Harper, in childbirth, and his infant son in August 1932.” It was Dr. Martin Luther King Jr.’s favorite song and he often invited Mahalia Jackson to sing it at civil rights rallies. At his request, she sang it at his funeral in April 1968.

Here is a five minute version sung by Jackson: https://www.youtube.com/watch?v=as1rsZenwNc 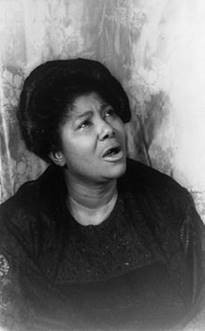