Friday, October 23
“She was covered in a quilt, the Creek way.
But I don’t know this kind of burial:”

Poet Laureate Joy Harjo calls Tulsa her home, lives there and, in subtle ways, lives from there also. As with her many poems, she brings her unflinching memory and voice, tender and alive with vitality, to a resilient human place. I am only now meeting Jennifer Elise Foerster. She stopped me into stillness when I read “Leaving Tulsa” this morning, and, yes, she reminds me of Joy Harjo.

“I understand how to walk among hay bales
looking for turtle shells.
How to sing over the groan of the county road
widening to four lanes”

Best to read the poem out loud, with pauses. Have a blest weekend, here as October continues its songs for us.

Once there were coyotes, cardinals
in the cedar. You could cure amnesia
with the trees of our back-forty. Once
I drowned in a monsoon of frogs—
Grandma said it was a good thing, a promise
for a good crop. Grandma’s perfect tomatoes.
Squash. She taught us to shuck corn, laughing,
never spoke about her childhood
or the faces in gingerbread tins
stacked in the closet.

She was covered in a quilt, the Creek way.
But I don’t know this kind of burial:
vanishing toads, thinning pecan groves,
peach trees choked by palms.
New neighbors tossing clipped grass
over our fence line, griping to the city
of our overgrown fields.

Grandma fell in love with a truck driver,
grew watermelons by the pond
on our Indian allotment,
took us fishing for dragonflies.
When the bulldozers came
with their documents from the city
and a truckload of pipelines,
her shotgun was already loaded.

Under the bent chestnut, the well
where Cosetta’s husband
hid his whiskey—buried beneath roots
her bundle of beads. They tell
the story of our family. Cosetta’s land
flattened to a parking lot.

Grandma potted a cedar sapling
I could take on the road for luck.
She used the bark for heart lesions
doctors couldn’t explain.
To her they were maps, traces of home,
the Milky Way, where she’s going, she said.

After the funeral
I stowed her jewelry in the ground,
promised to return when the rivers rose.

On the grassy plain behind the house
one buffalo remains.

Along the highway’s gravel pits
sunflowers stand in dense rows.
Telephone poles crook into the layered sky.
A crow’s beak broken by a windmill’s blade.
It is then I understand my grandmother:
When they see open land
they only know to take it.

I understand how to walk among hay bales
looking for turtle shells.
How to sing over the groan of the county road
widening to four lanes.
I understand how to keep from looking up:
small planes trail overhead
as I kneel in the Johnson grass
combing away footprints.

Up here, parallel to the median
with a vista of mesas’ weavings,
the sky a belt of blue and white beadwork,
I see our hundred and sixty acres
stamped on God’s forsaken country,
a roof blown off a shed,
beams bent like matchsticks,
a drove of white cows
making their home
in a derailed train car. 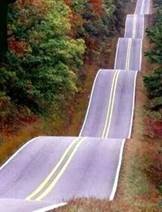