“I too saw only the obstacles”

Today’s post took shape last evening while talking with a soul friend who is spending this week at home, in stillness, tasting her life in its present moment.  Something in our conversation reminded me of still another from Denise Levertov, a late work in Sands of the Well (1996).  Wikipedia tells me that “Oneiromancy (from the Greek όνειροϛ oneiros, dream, and μαντεία manteia, prophecy) is […] a system of […]  interpretation that uses dreams to predict the future.”  To me, the definition is a little undercooked.  Contemplating a dream that asks for my attention is less about the future than about what vibrates beneath the surface of my life now.

Levertov approaches this dream with the assumption that the characters reveal dimensions of herself, the dreamer —  the blind man and she who led him, uninvited, through a vast museum filled with beauty turned into hazards.

It helps to read the poem out loud, more than once, with pauses.

Blessings on your week,

I spent the entire night leading a blind man
through an immense museum
so that (by internal bridges, or tunnels?
somehow!) he could avoid the streets,
the most dangerous avenues, all the swift
chaotic traffic . . .          I persuaded him
to allow my guidance, through to the other
distant doors, though once inside, labyrinthine corridors,
steps, jutting chests and chairs and stone arches
bewildered him as I named them at each swerve,
and were hard for me to manoeuver him
around and between.  As he could perceive nothing,
I too saw only the obstacles, the objects
with sharp corners; not one painting, not one carved
credenza or limestone martyr.     We did at last
emerge, however, into that part of the city
he had been headed for when I took over;
he raised his hat in farewell, and went on, uphill,
tapping his stick.  I stood looking after him,
watching as the street enfolded him, wondering
if he would make it, and after I woke, wondering still
what in me he was, and who
the I was that took the long short-cut with him
through room after room of beauty his blindness
hid from me as if it had never been. 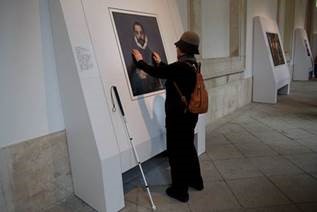 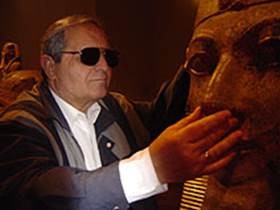