Today I am indulging in a musical/poetry tradition most dear to me, the seven great “O Antiphons” for the closing days of Advent in the Christian tradition.

The seven last days of the Advent Season have embedded in short prayer-poems a day-by-day slow motion crescendo in Gregorian Chant.  They date at least to the 8th century, probably a couple hundred years earlier than that.  I am a sucker for the Latin chant versions.   One December, about the 22nd of the month, I was driving home from visiting friends in Pittsburgh along Hw 80 in Ohio.  At some not too busy point, I pulled over,  got out on the passenger side, stood there book in hand, and sang all seven antiphons.   At least until a state trooper pulled up behind me, got out and came up.  “Sir, what are you doing?”   I explained.  The trooper told me that the side of a freeway was not a good (nor legal) place to stand and sing strange prayers.  There was a legitimate pull off in a half mile down the road.  No ticket but, I suspect he told his wife about this one that night along with whatever other crazies he had encountered that day.

Here’s today’s antiphon sung in chant (the last part seems to be cut off)   http://www.youtube.com/watch?v=CvafrxZ_Ww4

a translation:  “O Lord, and leader of the house of Israel, who appeared to Moses in the burning bush,  and gave to him the law on Mount Sinai,  Come to redeem us with your strong  outstretched arm.” 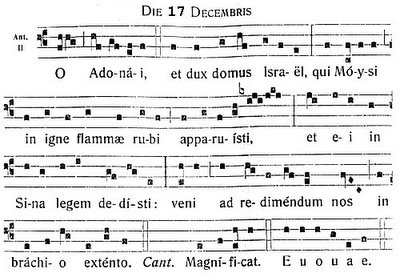 The first letters of the seven titles taken backwards form a Latin acrostic of “Ero Cras” which translates to “Tomorrow, I will be there”, mirroring the theme of the antiphons.

Word to the wise.  If you get in a habit of  singing these, don’t do it by the side of the highway.