March 18 Tagore: “the bliss of the touch of the one in the play of the many”

“Counter-Intuitive”:  I happened to hear four adult stories of fatigue and anger and grief yesterday afternoon and evening.  That’s not counting the bravery of 12 year old Deonté Whitehead who jumped in front of three strangers threatening with a drawn knife to rob his mom as they got out of the car to head inside their house.

“Responding that she had none [no money], the three became angry and started using profanity, which spurred Deonté into action. Police said when one person produced a knife, Deonté jumped in front of his mother. That person “started flinging it,” the seventh-grader said, so he put his arm out.  The boy said he was “scared for a minute,” but his mother said: “I don’t think he was. He wanted to help his mom. … At that time it was just more adrenaline — trying to protect his mom.”  Deonté took some stitches.  Neighbor Charlene Broaden “said she was surprised to hear about a stabbing on her street.  As bad as (the neighborhood) looks, it’s getting better,” she said “They’re knocking down the burned-out homes.”  Jim Grenwick, president of the Cornerstone Village Community Association, said: “The young man is heroic. He did the right thing,” Grenwick said. “He didn’t need instruction to try to protect his mom and that’s a good thing.”  Detroit News

Good news and hard news.  It’s easy to get worn down.   Sheer beauty can look inadequate for the task repairing violent damage, like the stiches in Deonté’s arm and the worries about neighborhood crime.  But I doubt it.  Beauty does not deceive when it catches our attention. Its work is reminding us that deep down, under the exhausting burdens of our adult commitments, lives a wellspring of sacred grace.

Rabindinath Tagore saw his share of the world’s wounds.  Many of his poems are like today’s post, realism and wonder seamlessly intertwined.   Have a good day.

Thou hast made me known to friends whom I knew not.
Thou hast given me seats in homes not my own.
Thou hast brought the distant near and made a brother of the stranger.

I am uneasy at heart when I have to leave my accustomed shelter;
I forget that there abides the old in the new,
and that there also thou abidest.

Through birth and death, in this world or in others,
wherever thou leadest me it is thou, the same,
the one companion of my endless life
who ever linkest my heart with bonds of joy to the unfamiliar.

When one knows thee, then alien there is none,
then no door is shut.
Oh, grant me my prayer
that I may never lose the bliss of the touch of the one
in the play of the many. 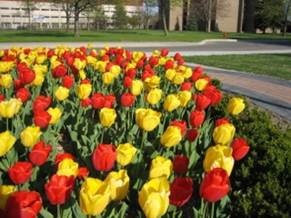