Friday, April 15 “These things are a tiny taste of the bigness of the world.
They were there before you looked;
they will be there after you go.
None of it depends on you.”

I came across this short essay in the NY Times yesterday (posted in the Times last Sunday).   This marks a rare occasion for the Work Day/Hard Time poetry list.  No poem.  Instead, another great literary form, the short contemplative essay.   Sam Anderson’s essay, which I’ve read slowly twice so far, makes me cry in its final paragraph.  Settle in and let his English prose sing to you.

I think of this as a wisdom read to inch us readers into what looks to be a spectacular spring weekend in Southeast Michigan,  a great time to look out the window, breathe in and out, and be glad for one’s eyes and lungs as the season changes around us with drop-dead beauty.

“But this is the power of windows: They contradict your easy assumptions.” 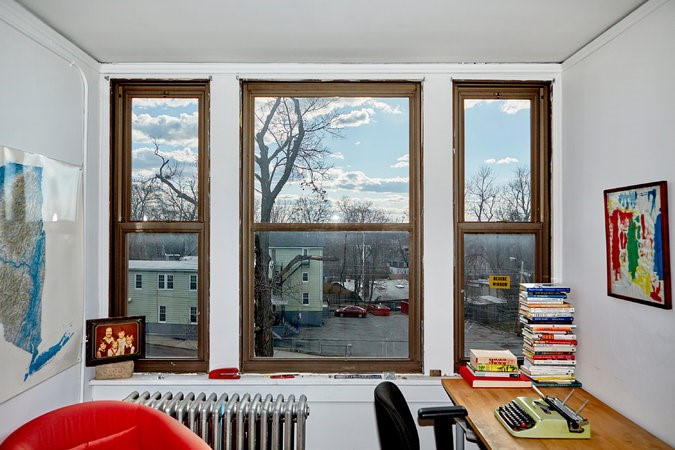 The view from the writer’s office in upstate New York. Credit Noah Kalina for The New York Times

Our windows keep shrinking. Our vision narrows and narrows. Mine roams, for much of each day, in a space roughly the size of a playing card: the rectangle of my phone’s screen. The view through that piece of glass is not out onto the actual world but inward, down a digital depth over which I exercise near-­dictatorial control. If I want to see a bird on my phone, I see a bird. If I want to see a manatee captioned by a motivational slogan, I see that. This means, of course, that my phone is not really a window at all. A real window is something that frames our fundamental lack of control.

Windows are, in this sense, a powerful existential tool: a patch of the world, arbitrarily framed, from which we are physically isolated. The only thing you can do is look. You have no influence over what you will see. Your brain is forced to make drama out of whatever happens to appear. Boring things become strange. A blob of mist balances on top of a mountain; leafless trees contort themselves in slow-­motion interpretive dance; heavy raindrops make the puddles boil. These things are a tiny taste of the bigness of the world. They were there before you looked; they will be there after you go. None of it depends on you.

Sometimes what you see can be astonishing. One day, I was taking a nap in the red chair in my office when I woke up to the sound of a car crash. I sat up and looked, immediately, out my window. Across the street, in a parking lot, a car had just backed into a chain-link fence. The car must have been moving fast, because it was in bad shape: Its hood had popped up, its windshield wipers were snapping back and forth under a perfectly clear sky and part of its bumper was sitting on the ground. The fence was mangled, bent out in exactly the shape of the car’s back end.

I couldn’t believe I was seeing this, on an otherwise ordinary weekday morning, out of my office window. I watched the driver get out of the car. He was stocky with a shaved head; he wore cargo shorts and a flannel shirt unbuttoned to expose his chest hair. I disliked him immediately. After a few seconds of assessing the damage, he walked around the car and opened the passenger door — from which a very small child scrambled out. A toddler in the front seat! My disdain for this man increased exponentially.

As the child ran around the parking lot, the man tried to repair the damage he caused. He attempted to tug the ruined fence back into place, but it wouldn’t move. He tried to shove the fallen piece of bumper back onto his car, but that only made the rest of his bumper fall off too.

I sat in my red chair, looking out my window, silently cheering.

The man tried, a little harder, to fix the fence. He grabbed its vertical support pole, which was wickedly bent, and pulled against it with his full weight. The pole suddenly broke, and the man fell hard onto the blacktop. The entire fence fell on top of him, and one of his sandals flew off and landed 10 feet away on the sidewalk.

I think I laughed out loud. This was a slapstick masterpiece. It was brightening my whole day, the failure of this terrible man. He climbed out from under the collapsed fence and limped back to the apartment building above the lot, rubbing his elbow.

That, I thought, would be the end of it. The man — that villainous man — was going to leave all the chaos behind for someone else to clean up. It was only the middle of the morning, but I imagined him sprawled out on his sofa with a case of beer, eating horrible snacks, while his child played with fire and broken glass and battery acid near a malfunctioning electrical socket.

But this is the power of windows: They contradict your easy assumptions. They scribble over your mental cartoons with the heavy red pen of reality. The man emerged a few minutes later with some tools. He got to work immediately, detaching one of the fence’s bent support bars and hammering it straight on the asphalt. For the next hour, I watched out my window as he doggedly fixed the fence, straightening and reattaching its support bars, scrupulously unbending its bent chain-link. He even improved it. He stole a support bar from another fence farther back in the parking lot and added it to this one. Now the fence would be extra secure, stronger than before, impervious to damage.

This odious man was actually a hero. I was the lazy one, with my knee-jerk judgments and distant clichés, my superiority from three stories up. My window had taken a break, that day, from its usual programming — crows and squirrels roaming over a dead tree, cars piling up at a stoplight — to put on a little passion play for me, an allegory about the nobility of the human spirit. My ugly assumptions, I realized, were all about myself. I would never have fixed that fence; I would have panicked and run away. My window had woken me up from a nap to teach me a lesson in humility.

The incident changed my entire day. I went back to my shallow screens with new determination. Years later, I still look out my window at that fence almost every day. It still looks brand new. It makes me wonder what else that man has improved, and how I can make myself more like him.