Is this the third or the fourth Detroit Homecoming?   3 high-profile days when former Detroiters, now successful and resourceful, are invited back for a three day pitch to re-learn (and re-invest in?) the city.  Among other events last year, expats took one of three immersion tours in three neighborhoods (outside downtown and Midtown) where serious revitalization efforts are underway.  University District (see below) is one.   I can see it out my office window.   The excitement of a busload of expats with “real money” coming to our neighborhood, plus Brightmoor, and Dexter-Linwood is real.   It’s worth the effort to show off this come-back city.

It is also worth the effort to remember the decades when the wounds in these neighborhood emerged;  to remember the blight of fear of violence and of contempt for the city.  These thoughts led me to bring back Detroit poet Jamaal May’s blunt “There are Birds Here.”   Like every strong poem, the poet’s search for precise, flint-hard words can renew a reader’s imagination and vocabulary,  that, along with work on our neighborhood across the street, also counts as  rebirth.

Every poem does best when read aloud, with pauses.

Have a blest day,
john sj

There are birds here,
so many birds here
is what I was trying to say
when they said those birds were metaphors
for what is trapped
between buildings
and buildings. No.
The birds are here
to root around for bread
the girl’s hands tear
and toss like confetti. No,
I don’t mean the bread is torn like cotton,
I said confetti, and no
not the confetti
a tank can make of a building.
I mean the confetti
a boy can’t stop smiling about
and no his smile isn’t much
like a skeleton at all. And no
his neighborhood is not like a war zone.
I am trying to say
his neighborhood
is as tattered and feathered
as anything else,
as shadow pierced by sun
and light parted
by shadow-dance as anything else,
but they won’t stop saying
how lovely the ruins,
how ruined the lovely
children must be in that birdless city.

Overview: This area, anchored by the University of Detroit Mercy and Marygrove College, has been a key target in the city’s redevelopment efforts outside the greater downtown area. Development interest has been robust.  The Live6 Alliance, an effort by Detroit Mercy, Kresge and the Detroit Economic Growth Corp.,  was launched three years ago to bring economic development to the Livernois-McNichols area, which includes the Fitzgerald neighborhood targeted by The Platform and Century Partners.

“Organizers previously held an annual pitch competition, but this year startups and entrepreneurs will mingle with the visiting Detroit natives through a networking fair called Motor City Mashup.

Created based on community research by Challenge Detroit and led by Medvis Jackson, a Challenge Detroit fellow, and Sheu-Jane Gallagher, an experienced startup coach, Motor City Mashup will bring 50 small businesses. Many will set up in booths, displaying signs showing what kind of advice they may need from industry experts.”
http://www.crainsdetroit.com/detroit-homecoming/detroit-homecoming-marks-fifth-edition 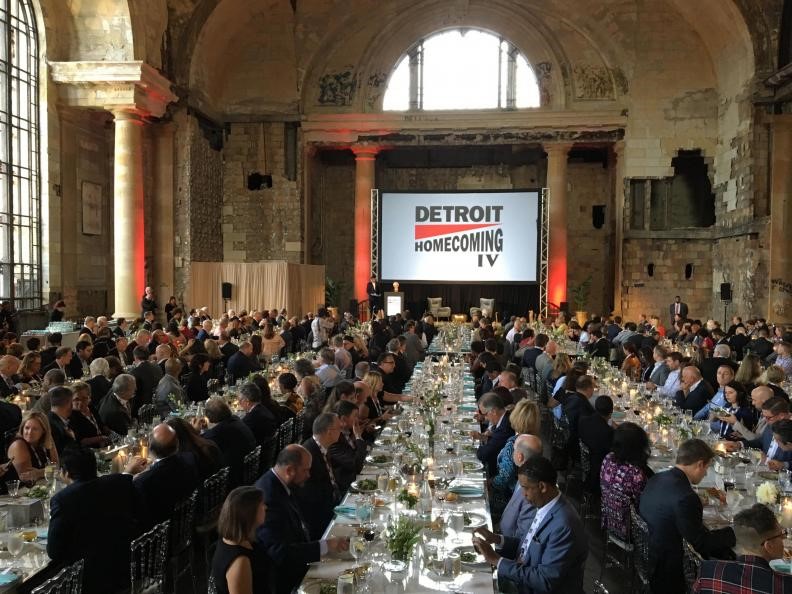