Mary Oliver has anointed the pages of the “Work Day/Hard Time” list many times since the list began in September 2103. It’s a good bet that her language will continue to keep our 2490 readers company now that the body of her work is complete.  This morning, too, Michael Her Many Horses, will be sent on his way by his family and friends at the Rockyford Catholic Church on the Pine Ridge Reservation in South Dakota.   Today’s post offers both people an offering of some words; think of both posts as flowers at their graves bearing witness, as flowers left near the resting places of people made sacred by people who carry them in their hearts and memories.

To honor Michael, since I cannot make it to Rockyford tomorrow, I want to ask Fr. Klink to read these words for me.  Please, also, read this saying that Dom Helder spoke in the years before he died in 1999 in Brazil.   Think of it as a blessing for Mike’s sending.

“Since word came to me last Sunday that Mike had died he’s been on my mind – – remembering him, missing him, tasting the ways he touched me over 50 years.   I woke on a soft winter morning this week and an improbable spirit companion for Mike came to mind, one of my heroes from Recife Brazil, Dom Helder Camera who died in 1999.   Mike reminds me of Dom Helder, especially the way Mike loved to look at realities in the world and to say what he saw.  Sometimes Mike would call me to talk and, while talking, he would clown around almost like a Heyoka  but like a Heyoka you could tell that his teasing always came from looking and seeing in the world.   That capacity for vision cost Mike, he lived with sorrows about the wounds at work in the world but. to my knowledge, he never gave up on paying attention to the way the world lives its many lives.  I think Mike never stopped expecting to recognize meaning in what he saw; he was the complete opposite of a tourist.  Was there sadness in his passion for paying attention?  I think so.  Was there joy in the resiliance of Mike’s expectation that paying attention mattered, and was worth the stillness it required?    Yes.

I don’t know if Mike ever met Dom Helder but, if he had, I like to think they would have recognized each other.

It is possible to travel alone, but we know the journey is human life

and life needs company.
Companion is the one who eats the same bread.

The good traveler cares for weary companions, grieves when we lose heart,
takes us where she finds us,  listens to us.

Intelligently, gently, above all lovingly, we encourage each other to go on
and recover our joy
On the  journey.”

“April 18, 2018.   Yesterday, a magical time for me and my sibs at Mary’s northern Wisconsin home.   The best blizzards in a long time (two of them, separated by c. one hour, both 14” plus with serious winds sculpting them.   This morning, back on campus, I looked for a Mary Oliver poem that was new to me and found one about a very late winter storm.   It’s exciting to find a new Mary Oliver poem.   Yes, definitely good to read it out loud, with pauses.” 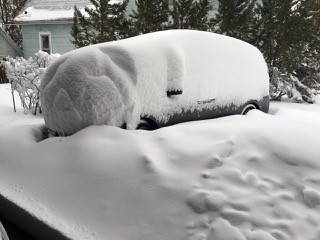 Chunky and noisy,
but with stars in their black feathers,
they spring from the telephone wire
and instantly

they are acrobats
in the freezing wind.
And now, in the theater of air,
they swing over buildings,

dipping and rising;
they float like one stippled star
that opens,
becomes for a moment fragmented,

then closes again;
and you watch
and you try
but you simply can’t imagine

how they do it
with no articulated instruction, no pause,
only the silent confirmation
that they are this notable thing,

this wheel of many parts, that can rise and spin
over and over again,
full of gorgeous life.

Ah, world, what lessons you prepare for us,
even in the leafless winter,
even in the ashy city.
I am thinking now
of grief, and of getting past it;

I feel my boots
trying to leave the ground,
I feel my heart
pumping hard. I want

to think again of dangerous and noble things.
I want to be light and frolicsome.
I want to be improbable beautiful and afraid of nothing,
as though I had wings.

From: Owls and Other Fantasies: Poems and Essays