May 27 “there lives the dearest freshness deep down things”

“Because the Holy Ghost over the bent
World broods with warm breast and with ah! bright wings.”

The 19th century Jesuit poet, Gerard Manley Hopkins, revolutionized poetry with his unchained cadences, which he called “sprung rhythm,” and daring vocabulary, words often from Anglo-Saxon, rather than Latinate roots.  This shocked his Poet Laureate friend, Robert Bridges,  who berated him for the density of his word choices and cadences both.

On November 6, 1887, Hopkins wrote Bridges, simultaneously teasing his friend and attempting to explain the density of his poetic language.    Try reading GMH’s explanation out loud; note that this apologia for demanding word choices emerges as a single, grammatically-correct sentence.

So, take a deep breath before you begin.  For that matter, try reading “God’s Grandeur” out loud as the poet intended.

Best to read the poet out loud, with pauses,  several times.  Perhaps as a moment of gladness and gratitude for an open sky that traces its fingertips across Livernois and caresses my city, its beauty and its troubles both.

And wears man’s smudge and shares man’s smell: the soil
Is bare now, nor can foot feel, being shod.

And for all this, nature is never spent;
There lives the dearest freshness deep down things;
And though the last lights off the black West went
Oh, morning, at the brown brink eastward, springs —
Because the Holy Ghost over the bent
World broods with warm breast and with ah! bright wings. 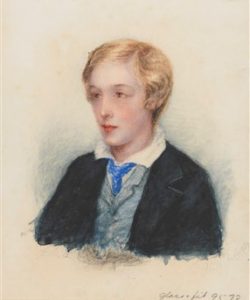