May 29, 2020 “Growing is Hard Work” Mary Tobacco and her daughters build a garden on the Pine Ridge (Lakota) Reservation

Friday morning, the older two of Mary Tobacco’s children, Anya and Essence, have been pitching in on a large, start-from-scratch vegetable garden, plowing the prairie, planting, fencing it in.   Some of the crops will help sustain the family, some will ride in the F-150 down the roads of the Calico district to help feed elders whose poverty threatens them with serious hunger.   Covid-19 begins to spread up and down those same roads; all the heavy lifting, though, is healthy and fun and offers promise for the future in hard times.

Watching the garden grow in pictures one after another is also watching teenagers grow.  They are part of my family too. 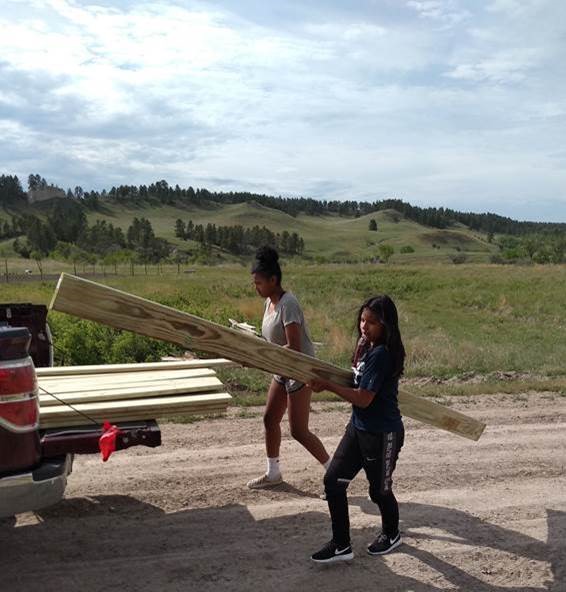 The pics connect Mary T’s District (she is the District Director) with early memories of Detroit’s bankruptcy and led me to re-print a few paragraphs from December 2014.   They remind me of frightening times that began in the summer of 2013.   The city has turned positive even in the midst of our current Covid challenges.  Beauty and bravery.  D H Lawrence’s short poem frames these times of playful courage, fatigue, and hope.

“Late December two years ago the Detroit bankruptcy had matured into grinding uncertainties;  surely for the c. 32,000 Detroit citizens whose futures looked harrowing — would their pensions, the magnitude of their underfunded status becoming obvious by then, be chopped down to $0.75 on the dollar?  Surely for the Detroit Institute of Arts — would their world-class collection of treasures be gutted by hungry creditors?  Surely for the city — would Detroit lose any shot at a turn toward fiscal integrity if the bankruptcy went sour — any shot at rebuilding its bus system, its computer system, its water system, its neighborhoods, because the creditor process stripped the city clean until it resembled a carcass instead of a vital place in which people love to live?

I noticed in yesterday’s Crain’s Detroit Business (Dec 16, 2014), an article observing that Bankruptcy Judge Stephen Rhodes and, doubtless, Mediation Judge Gerald Rosen, had jawboned down the city’s legal bills from the most complex city bankruptcy in US history and freed up another $25 million that could go to pressing needs — like buses or computer systems or the neighborhoods, to go with the $1.7 billion fund already set aside as part of the Grand Bargain for those same rebuilding purposes.  No mistake about it,  Detroit still packs wounds and has a long list of rebuilding projects —>  but they are projects, which, like the rebuilding of Livernois just outside our McNichols Campus, are starting points with believable futures.  Last year’s knocking on our doors in the night of fiscal threat begin to look like D.H. Lawrence’s three strange angels.  Yes, gun-wielding violent people can still slaughter innocent children in place after place, country after country, just as some Taliban tried to murder Malala, Nobel Laureate champion of girls who risk their lives to attend school.   Yes, Detroit’s neighborhoods require daily courage to build on a miracle of cross-race and cross-politics mutual risk-taking through all this year of 2014.

Like the birth of every child, the birth of hope emerges into the world bloody and exhausted . . .  but pulsing with life.”