Monday, June 1 — rules are meant to be broken sometimes

Before I decided about today’s post, I sent an email birthday card to a soul friend who loves Joy Harjo’s poetry; me too; whenever I read “She had some horses,” it feels new to me.   Does this morning’s drop-dead beautiful sky and sun make up for the swirl of stories – – of rage and fear that demand attention these days?   That would be a stretch.  But reading “She Had Some Horses,”  Joy Harjo’s epic masterpiece . . .   Better . . .  reading the poem in the presence of an elementary school San Francisco poetry class  — teacher and students together — feels up to the challenge of these times.

Best to read Julie Morse’s memoir and the whole poem out loud, with pauses.   And breathe your way into surprises for the first day of this week.

Blessings on your week,

Friday, August 29, 2014  — Joy Harjo “She had some horses”
“THE LAST POEM I LOVED: SHE HAD SOME HORSES BY JOY HARJO”   BY JULIE MORSE
Reading my own poetry feels like looking into a blurred old mirror at an antique shop. I can’t tell if I look good or pale and pasty. I can’t figure out if it’s my writing or my self-criticism that is falling flat. But lately that’s been changing. I’ve been writing poems that aren’t cast in a massive shroud of self-judgment and I think it’s because I found Joy Harjo.

I discovered “She Had Some Horses” while preparing for the poetry class I teach at an elementary school in San Francisco. Harjo’s poems ache with grit, grief and nature. They feel like that moment of insomnia when twilight breaks. Her lines are curt and heavy but they construct delicate stories. I thought She Had Some Horses would be perfect for kids this young, whose imaginations are still lush and wild. To them, horses are still spirited creatures, not farm workers.

My students are eight through eleven years old. Some of them are at their grade reading-level, some are above and a few still can’t spell. My students don’t have the compulsion to analyze or to second-guess themselves. They’re quick to voice their instincts. But at the same time, they’re terrified of being wrong. Some days I feel like I’m a teacher, and others I feel like I’m just a referee hopelessly demanding that kids stop teasing, stop yelling, stop throwing pens.

At many schools, teachers have to adhere to a curriculum predesigned by a corporate education company. I am lucky that I get to make my own lesson plans. We’ve read Carl Sandburg, Rita Dove, Pablo Neruda and Luisa Valenzuela untranslated. Every kid in my class speaks Spanish at home and English in school; their brains are racing to simultaneously master two languages. Their poems are often a composite of Spanglish.

I can’t teach poems that have words with too many syllables, or poems about sex or violence or drugs. Although most of these kids already know about that stuff, and the meanings of the words they’re not supposed to hear or say. I must pretend that they don’t and that their minds are wholesome and pure.

We only read the first half of part one of the poem, and I ask if anybody has any thoughts about it.  “The horses are magical,” says Silvia, a fourth-grader. “The horses are supposed to be something else,” says Emanuel, a fifth-grader. “Yes, perfect!” I say, this is probably the most in-depth analysis the class has made about any poem we’ve read.  I tell the class the horses mean more to Native Americans than they do to us. I explain that they are supposed to be a feeling, that they’ re something important to her, they’re her community. The repetition of “she had horses” is to express their significance.

“I don’t get it,” mumble a few students. I falter. I realize I was being too conceptual.  Then I tell them these horses are horses but they’re also everything and everybody that she loves or make her feel sad or happy.  I could say more but I’m always afraid of saying too much. The poem is a gorgeous chant that swims laps in my mind. It’s about horses and it’s not. It’s something that I read over and over again just to bury myself deeper into its staggering meaning.

It’s time to write. I put on Stevie Wonder and a few kids rock in their seats to the music. I instruct them to write about something or someone that is important to them, and define them using Harjo’s style of repetition. But instead of “she had horses…”, to say, “my sister…” or “my dog…”. Some of the students almost get it, but really just end up writing physical descriptions, “my turtle is small, my turtle has a hard shell…”

But, Kimberly, a fourth grader has got it:
My sister when she uses a red marker she thinks about blood.
My sister is plenty of books.
My sister people thinks she is my aunt.
My sister she loves to study
My sister her eyes sparkle like a star.
My sister she sings like a jazz singer.

Kimberly’s is an ode to her sister just like Harjo’s is an ode. The repetition in both is a comforting reinforcement.  In the introduction to her book, She Had Some Horses, Harjo says, “it’s not about what the poem means, it’s ‘how’ the poem means.” And maybe that’s what helped turn poetry around for me. A poem is just the flight of colors and the collision of stories. No scrutiny needed.

Everybody raises their hand to read first. I declare every poem “awesome”, “beautiful”, “amazing”. I dole out compliments like the guy who hands out flyers that say “COMPRAMOS ORO” down the street. Sometimes I am surprised by my own generosity, but to me it is perfect, beautiful and amazing when anybody can be this vulnerable and proud.

Julie Morse lives in San Francisco and is a poetry teacher.

These were the same horses. 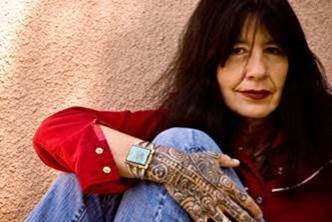