I’ve never posted after work on Friday before.  But, just before heading over to our Faculty Achievement Annual Dinner, I read this account from Mary Jo McConahay, a reporter who came very early to the Jesuit University of Central America on this day 25 years ago Sunday, to see the murdered bodies of six Jesuit faculty members, their cook and her daughter, all murdered by the right wing military of Salvador in the middle of the night.   She got there before the blood had been cleaned up.  One thing Ms. McConahay does not mention that has stayed in my mind:  the killers split open the skulls of some of the faculty members, scooped some of their brains out, and left them beside their dead bodies.  It was, I think, a statement by that vicious police state, that professors with PhDs, working to find a voice for brutally poor people, would not win.  Their brains were reduced to trash.

These martyrs were well known across the Academy in the US;  many US scholars had studied with them, respected their intelligence, in many cases loved them the way PhD graduate students come to love each other.   They were like our faculty, dedicated to research, teaching and mentoring new generations of students.  Because they were such credible teacher-scholars, their murders woke the US Congress, thanks especially to Representative Joe Moakley whose Legislative Commission forced some truth into the light about the US funded military who murdered these 8 people, who then joined the tens of thousands of Salvadorans killed with savage brutality in that hard war.  As a result of their murders and Joe Moakley, the US began to back off from funding a brutal regime.

Today, 25 years later, it remains an imperfect world.  Still the beauty of these 2 women and 6 men shines.    When Joe Moakley died of cancer in 2001, I heard on the news that construction workers on projects along the funeral route in Boston, stood to attention as his body passed.  I plan to stand to attention on Sunday. 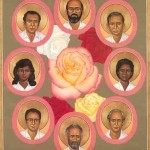