It’s safe to say that no US Jesuit of my generation or the next ignored Dan Berrigan, sj.  He died on Saturday, April 30, 2016 at 94, a prophet relentlessly called to name the violent evasions of the 2nd half of the 20th century and the first two decades of our current century:  at home with prison, a source of fury to some in leadership positions — government officials and bishops come to mind.  He wrote, and spoke, and created symbolic acts so vivid that — love them or hate them — you could not ignore their presence on the landscape.   One of my favorite thinkers of that era, the child psychologist Robert Coles, held extended secret conversations with Berrigan while Dan lived in hiding, hunted by the FBI.   Some agents finally caught him.  While Dan was in prison, Coles edited the transcripts from their hidden talk and so the two of them co-authored a great and demanding book, The Geography of Faith: conversations between Daniel Berrigan, when underground, and Robert Coles (1971).  The book revealed my youth to me, opening depths in my imagination that I was still learning to live with during my early 30ies.

Yesterday, thinking ahead to this morning’s post, I looked for one of his poems that got it about his fierce presence in the world: flint-hard words.  Pax Christi’s eulogy offered “Some.”  Like many poems that have graced this list, it will want you to read it several times,  out loud with pauses.

Have a blest week during these days of deep autumn,

Some stood up once, and sat down.
Some walked a mile, and walked away.

Some stood up twice, then sat down.
“It’s too much,” they cried.
Some walked two miles, then walked away.
“I’ve had it,” they cried,

“Because the cause is
the heart’s beat, and
the children born, and
the risen bread.”

Some, by Daniel Berrigan 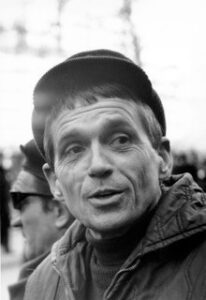