“Is our main repenting, perhaps, made of believing good news,
that there is news,
something new,
and it is good?”

When I pray from Mark or Matthew or Luke (i.e., the three “synoptic gospels”),  it helps me to treat the evangelist as a poet, to allow the surprise buried in the text to stop me in my tracks.

Long ago, when I took a job here in 1980,  I wrote this poem based on Mark 1:15.  I found the challenges facing the university daunting.   This gospel text, “Repent and believe the good news” began to get my attention,  as strong poems can.    A teaching of St. Ignatius, (i.e., that I ask to grow in “intimate knowledge of our Lord who has become human . . .”)  began to challenge me.  “To become human” implies being born in some particular place with its own historical circumstances;  Jesus was born in one of the world’s meanest, poorest, and most violent places: the Roman Empire’s grinding police state where crucifixion of people who opposed the state became horrors up and down that small country (e.g., as many as 2000 rebel fighters were crucified during one period in the early childhood of the boy Jesus).  Sometimes it took a day or two for a strong man to suffocate to death;  crucifixion was intended to terrify,  intimidate and subdue opposition.

For me that became a deep surprise, taking the teaching of the young man Jesus, “Repent and believe the good news” seriously.  What could the evangelist poet Mark mean?   And that led me, little by little, to notice that where I was born (Marinette, WI, 1939) was a much less frightening place than where Jesus was born in his historical time and place.  The place where Jesus was born  more resembled the circumstances of 21st-century immigrant children torn from their mothers and fathers at U.S. borders. It helps, when I read this saying from Mark 1:15, to allow the poet’s word-choices to open my imagination into deep, shocking, surprise, like every strong poem would.  Best to read the poem out loud, with pauses.

Not everything about my Catholic faith makes me proud; but this teaching and men and women who have tried to live it, often  at the cost of their blood, stop me in my tracks,  like any strong poem should. 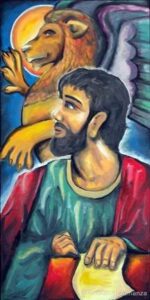