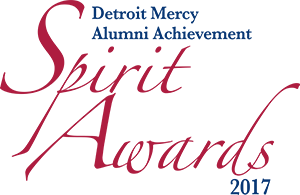 Each year, the University honors one alumnus from each of its schools and colleges for an Alumni Achievement Spirit Award. These honorees are leaders in their fields and have made their marks in other ways, too.

The 2017 Spirit Award recipients who will be honored at a special event on April 28 are:

Michael J. Brenner ’67 — College of Business Administration: Brenner is executive vice president and chief financial officer of Global Corporate Relations of The Related Companies. He joined the company in 1996 and is responsible for overseeing Related’s accounting, treasury, information systems, risk management and human resources functions. He has maintained his relationship with the University as a speaker and Advisory Board member and was inducted into the CBA Hall of Honor in 2010.

Charles E. Lucas, M.D. ’59 — College of Engineering & Science: A professor of Surgery at the Wayne State University of Medicine, Lucas is well known for his work in the fields of shock, trauma and acute care surgery. He has contributed to the surgical literature by co-authoring more than 350 articles, many of which are regularly cited and have led to improved patient care.

Mary Maurita Sengelaub, RSM, ’49 — College of Health Professions: As a Sister of Mercy with a nursing degree and a master’s degree in hospital administration, Sr. Sengelaub has been a pioneer, visionary and inspiration to colleagues in the Catholic health ministry for more than 60 years. She is the retired chief nurse executive for the Catholic Healthcare Association. A graduate of Mercy College of Detroit, Sr. Sengelaub worked to improve healthcare for underserved populations in the American South.

John P. Hayes ’71 — College of Liberal Arts & Education: Hayes has extensive experience in radio station management and ownership in North America and Europe. He is known for his innovations in transparency with advertisers and in ethics in the radio industry. Hayes has long maintained his relationship with the University and in 2016 was a guest speaker at an Institute for Leadership and Service event.

Rainy Hamilton, Jr. ’78, ’79 — School of Architecture: Hamilton established his own Detroit-based architectural firm in 1993, and has expanded over the years to include more than 65 employees. Hamilton Anderson Associates’ mission is to contribute to the positive evolution of urban environments and progressive social cultures. He has served on the Michigan Board of Architects and the Michigan Board of Land Surveyors. He is a member of the School’s Advisory Board.

Carl E. Misch, D.D.S. ’73 — School of Dentistry: Misch is the founder of the Misch International Implant Institute, a one-year continuum for implant education, with locations across the world. The program is the primary implant education forum for six dental school specialty residencies and he has trained more than 4,500 dentists in the hands-on yearly forum in implant dentistry. He is the 2014 winner of the American Dental Association’s Board of Trustees Distinguished Service Award.

Charles R. Rutherford ’53, ’57 — School of Law: Rutherford received his J.D. in 1957 after earning a bachelor’s degree in civil engineering. His major contributions to the legal profession have been recognized by the Catholic Lawyers Society and Detroit Mercy Law, where he was given the Distinguished Alumni Achievement Award in 2009. He is retired of counsel from the law firm Dykema Gossett, PLLC and is president of the Michigan Supreme Court Historical Society.

More information about the event honoring these seven inductees will be available later this month on the Alumni Community website at community.udmercy.edu.