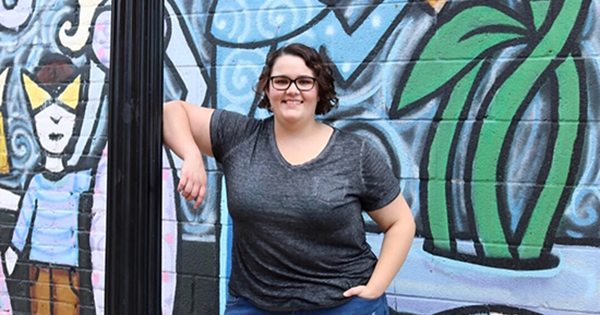 University of Detroit Mercy alumna Tavala Luciow ’19 originally planned to attend medical school after graduation, but now she hopes to pursue a career in academia.

Luciow was inspired to alter her career path by the relationships she built with Detroit Mercy administrators.

“I would like to be a dean of students like Monica Williams here or the provost like Pamela Zarkowski,” said Luciow, who also added Williams and Zarkowski have been inspirations for her along with Associate Dean of Students. “I feel like I can help people through Student Affairs. I didn’t really know Student Affairs was an option as a career path. My eventual goal is to be the president of a university, but that’s a long way out.”

Luciow recently graduated from Detroit Mercy with a bachelor of science in Biology and will attend Bowling Green in the fall to earn a master of arts in College Student Personnel. She is currently working as an intern in Detroit Mercy Student Life Office this summer.

Luciow enjoyed the service aspect of her time at Detroit Mercy and hopes to continue that tradition throughout her career. Her dedication to service earned her Detroit Mercy’s Institute for Leadership and Service’s John Daniels Servant Leader of the Year award.

“I don’t do service to be recognized, but it’s nice when people notice,” Luciow said. “I don’t really go out of my way to talk about it, I just do it and if someone wants to join me, then, awesome.”

But what Luciow is most passionate about was her time as president of Detroit Prevention Awareness in the Community (DPAC).

DPAC is a student organization that aims to spread awareness of sexual assault, dating violence and domestic violence both on campus and in the community.

“I really try to promote education on campus about sexual assault and domestic violence,” Luciow said. “I’ve noticed even when we talk about consent and stuff in classes, people got really skittish about the topic. I’ve tried to make it more of an open topic because it’s important to me. I feel everyone should be talking about it or at least open to speaking about it.

“I think the most rewarding part is recognizing that people really do have a passion for this topic. It’s just giving them the opportunity to say something and encouraging people to do it, because unfortunately a lot of people won’t come forward and say, ‘I don’t stand for this.’ People don’t want to get labeled as something. I think realizing there are a lot of people who do speak out and do support the prevention and education of this really helps.”

“We connect all those organizations with the students here, with the students in the high schools and with the community members just to make it an open conversation,” Luciow said. “I’ve realized that people don’t recognize the resources they have, if they do experience or know someone who experiences sexual assault or domestic violence.”

DPAC and Luciow have organized several events including The Rocky Horror Picture Show Shadowcast as well as the #HeelTheDivide walk.

“We do group discussions, we have talks from all the other groups on campus and a walk around campus,” Luciow said. “In some of our events we end up talking with the Girl Scouts and Boy Scouts. Throughout the whole thing, all the boys were asking questions about what they could do. Unfortunately, people think it’s only guys who do this and it’s not true. It’s a lot of toxic masculinity in the environment or what they are raised around. It’s cool to see a lot of young men who want to step up and change things. That was the biggest thing that changed me.”

Luciow was among a group of Detroit Mercy students who attended the conference at Georgetown in 2017 and decided they wanted to take a shot at hosting.

“We figured we could put an interesting spin on it because it wasn’t as service-based as we’re used to,” Luciow said. “So we wanted to give that opportunity to all the other Jesuit schools. I helped write the bid with other students and it got approved, and I’ve been in charge of finances and budgets ever since. It’s funny because I’m a biology major and I wrote the budget. And the business people are doing the talking and PR stuff.

“It’s not something I thought I would be doing. I think we’re expecting almost all of the 27 Jesuit college and universities.”

In addition, to studying biology, Luciow also minored in Theatre at Detroit Mercy. She was cast in Young Frankenstein and also wrote and directed two scenes for American Privilege, a devised theatre piece by the Detroit Mercy Theatre Company.

“I also performed in other scenes,” Luciow said. “That was the one event with the Theatre Company that we were all able to make as students and put on. That was my favorite project that we’ve done. We were able to write whatever we wanted as well as make it social justice oriented.”

Luciow is grateful for all the opportunities she was able to take advantage of at Detroit Mercy and is excited for the younger students she has helped mentor who will take over in the fall.

“I’ve had a lot of classes and opportunities that focus on leadership,” Luciow said. “Basically everything I’ve done has touched on our mission and is very mission driven. Not a lot of universities can say everything they do is related to their mission. That’s the one thing I’m really, really thankful for because I’m able to have all those opportunities and I can pass it on to new students. I really enjoyed my time at Detroit Mercy.”