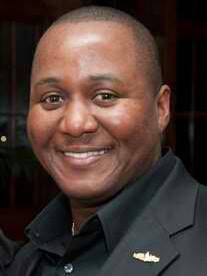 This sense that he owed something for his many blessings led the Detroit native to join the U.S. Navy at 17. He retired in 2011 after 23 years of service. His duty to the Jesuit and Mercy ideals of service to others became a part of him at Detroit Mercy Law, where he graduated from in 2015 and the College of Business Administration where he completed his MBA in 2018.

And duty is exactly why he created a planned gift to the Detroit Mercy School of Law.

“I am extremely humbled that I had an opportunity to benefit educationally, professionally and spiritually from an institution like Detroit Mercy,” he said. “As a result of my status as a veteran, I have no student loans and I believe it’s my duty to plan for those who are coming after me like those who came before me planned for me.”

Clay’s estate bequest, which he set up in 2014 before he completed his J.D., will go toward the daily challenges of African-American students, primarily mothers, face when pursuing a law degree. It’s an extension of his practice while in school of secretly helping other students pay for law school necessities like books and other materials they were struggling to afford.

This is how he looks at it: “Why not invest in an institution that you have benefited from? And if you feel you didn’t benefit from it, invest in making a change for the better.”

Clay runs The Clay Group, which provides real estate services and business training to veterans, and is starting his own law firm. He also serves as a cheerleader for Detroit Mercy Law.

“My charge to everyone who graced the halls of Detroit Mercy Law or earned a certificate or took a class, is to remember it is our duty to continue, in a deliberate way, the great legacy, the great atmosphere and the great education of the institution,” he said. “If not you, who?”