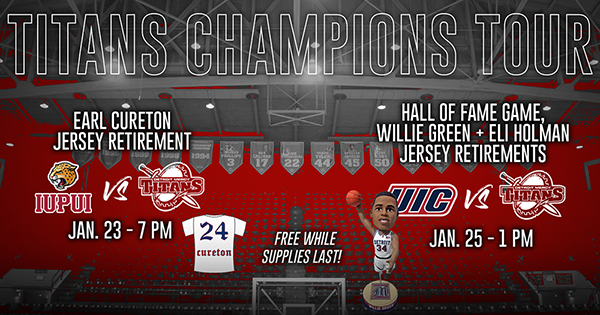 Detroit Mercy’s Department of Athletics celebrates several Titan legends for their achievements while in the red, white and blue during the Titans Champions Tour beginning tonight and running through Saturday.

Fifteen people will be inducted into the Detroit Mercy Athletics Hall of Fame, while three former men’s basketball players earn the distinction of having their number retired.

Former Titan basketball stars Green and Holman are being honored twice during the Titans Champions Tour. Both men are part of the 2020 Titan Hall of Fame class and will have their numbers retired Jan. 25. The first 250 fans in attendance will receive a free bobblehead, featuring Green from his days as a Titan.

A two-time NBA champion, Green was a part of four winning seasons at Detroit Mercy from 1999-2003, including a pair of 20-win campaigns and two postseason appearances. He is still fourth all-time in scoring with 1,779 points. As a senior, he was an AP All-American Honorable Mention and the Horizon League Player of the Year after averaging a league-best 22.6 points per game.

Green is currently in his first year as an assistant coach for the Phoenix Suns. He won two NBA championships in three seasons as an assistant with the Golden State Warriors.

Holman became the 34th player in school history to reach 1,000 career points, as he averaged 11.5 points and 8.6 rebounds with 29 double-doubles in his three years, while shooting a school-record 61.0 percent from the field. He was also one of the best defensive players in the Horizon League; his 163 blocks remain second in school history.

Holman has had an outstanding playing career overseas and in 2016, through a generous gift, helped finalize the Thomas and Arvie McNamara Family Student-Athlete Academic Center with the Eli Holman Study Hall.

Cureton, a color analyst for Detroit Mercy men’s basketball games and 2007 Titan Hall of Fame inductee, kicks off the Titans Champions Tour by having his No. 24 jersey retired. The first 250 fans in attendance can join in the fun as Detroit Mercy is giving away free Cureton jersey t-shirts.

A 12-year NBA veteran and a two-time NBA champion, Cureton suited up for the Titans from 1977-80. He helped the Titans make the 1979 NCAA Tournament as the team went 22-6, following it up with another winning season as a senior.

Detroit Mercy established its Titan Hall of Fame in 1977 in order to honor student-athletes, coaches and administrators who have helped develop the successful tradition of Titan Athletics. With the 2020 class entering, the Titan Hall of Fame will now stand at 144 all-time greats.

The Hall of Fame ceremony will take place in a private event on Jan. 24. All inductees will be publicly honored during Jan. 25’s men’s basketball game, which tips off at 1 p.m.

Read more about the 2020 Hall of Fame class here.