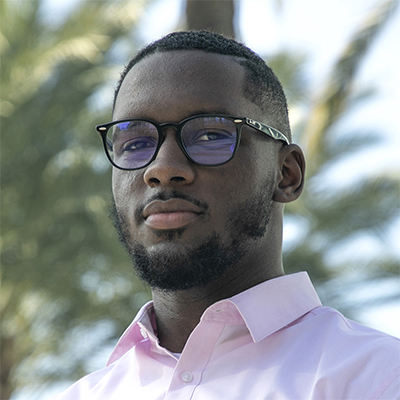 Mitchell Mims graduates this month with credentials most students graduating with a bachelor’s degree in biology don’t have: A published research paper in a national, peer-reviewed journal.

Mims is one of several people listed as authors of an article in Digital Medicine, a medical journal affiliated with the well-respected scientific journal Nature. The paper discusses the results of tests on a device that monitors the flow of spinal fluid through shunts in patients with hydrocephalus.

It’s a subject that has long been on Mims’ mind: His twin brother, Marcus, also listed as an author on the paper, is living with hydrocephalus. The brothers were born at 26 weeks, which led to Marcus developing the condition.

“When I was little, I always wanted to do research into hydrocephalus,” Mims said. “My brother has had a shunt all his life, and you have to be cautious about certain things like sports. Doctors told him not to go in planes because of the pressure changes. Since my brother’s been in college, he has had more than 12 operations and shunt revisions. Our mom has hydrocephalus. We’ve been affected deeply.”

Hydrocephalus is a common disorder caused by the buildup of cerebrospinal fluid in the brain. Typical treatment involves the surgical implantation of a tube – known as a shunt — to help drain the fluid.

But a shunt is problematic, Mims said. To begin with, the body often rejects it, but even after it is established, the failure rate of the device is high – up to 90 percent fail after 10 years, when they have to be replaced.

The more pressing issue, Mims said, is that shunt failure is difficult to detect.

“Symptoms of a shunt failure are vague, just a headache sometimes,” he said. For patients, that means any headache may require a trip to the hospital for diagnostic tests that can be invasive, costly, time-consuming and, ultimately inaccurate.

As a ReBUILDetroit student, Mims is required to do research and, urged on by his brother’s many recent operations, he realized he had the opportunity to follow up on his goal of researching the condition that has been a major part of his family’s life.

Last summer, Mims worked in a hydrocephalus research lab at Wayne State University, a Detroit Mercy partner in the ReBUILD program. He heard about some testing being by researchers at Children’s Hospital of Chicago, where he and his brother had been patients since birth. That affiliation made it easy for the Mimses to participate in the research. Mitchell did his part in the research during a gap between classes and the start of his WSU research.

The noninvasive device is about the size of an index finger and can be placed on the skin near the clavicle, where the shunt usually runs and where the skin is thinnest. It detects spinal fluid flow through thermal measurements. The results were promising and suggest the device could be used to determine whether a shunt is functioning properly.

“We were able to take the sensor home and test it,” Mims said. “It sticks on like a Band-Aid, which is why they call it the Band-Aid Sensor, and we tracked my brother’s spinal fluid flow sitting and lying down and it was different. We also measured the flow while going up and down in an elevator and found that the flow was different when we were going up and down.”

Developers of the sensor are awaiting FDA approval, but Mims hopes the research he and his brother took part in will move that process along.

Mims hopes to continue his research into hydrocephalus and some day go to Africa and India, where the condition is more prevalent due to the high number of people in those areas who don’t have access to medical care to treat it.

He says these dreams are in his reach thanks to the ReBUILDetroit program at Detroit Mercy.

“I want to thank the school and the ReBUILD program because of the support system they offered that made all this possible,” Mims said. “I would never have been able to do any of this without Detroit Mercy.”