Justin Prinstein ’12 says he still finds it hard to believe the impact his International Stars Baseball Academy has had on underserved children over the last seven years.

The University of Detroit Mercy School of Law alumnus created the nonprofit organization in the winter of 2012 to introduce Detroit children to baseball. But the lessons extend far beyond the playing field: International Stars helps children by providing mentorship, extracurricular programming and a support system.

“It’s one of those things where, sometimes you have to pinch yourself, because you don’t even realize it’s happening while you’re doing it,” Prinstein said.

Baseball has been a constant in Prinstein’s life. He played in college and professionally, transitioned into coaching and climbed the scouting ranks with several Major League Baseball franchises. He’s now a major league scout for the Cincinnati Reds.

The idea of International Stars was brainstormed while playing and coaching overseas. Prinstein, the organization’s executive director, was hosting clinics in Hungary for kids who were unfamiliar with baseball and wanted to create a similar program upon returning home to study at Detroit Mercy Law.

Michigan’s climate prevents year-round baseball outdoors, and it doesn’t help that facilities and resources available to children in inner cities are lacking, says Prinstein. He experienced this firsthand as a law student from 2008-12, having to train for his professional season at the Boll Family YMCA.

During his training, Prinstein met Larry White, a maintenance worker at the downtown Detroit facility and youth sports coach, who agreed to help make his vision a reality. The two teamed up to host free winter-long baseball clinics at the Boll Family YMCA for children in Detroit.

The turnout was great, Prinstein said, and the next step became obvious: Explore creating a youth team consisting of children who participated in the clinics.

In the summer of 2013, International Stars fielded its first team in the Detroit Police Academy League (PAL) and MLB’s Reviving Baseball in Inner Cities (RBI) league.

“Baseball is just really not played in the inner city. And this became a passion of mine back in 2010-11,” Prinstein said. “I became really hyper-focused on seeing if we can get more kids in Detroit to play baseball and become more familiar with it.” 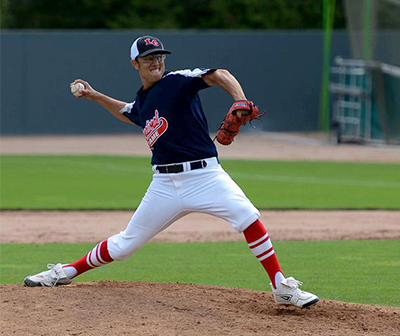 Prinstein admits he has never been one to sit still. During his seven-year professional playing career, which featured stops in Belgium, Israel, Australia and the Netherlands, Prinstein insisted on staying busy. He coached on the side and worked for MLB’s Houston Astros and Baltimore Orioles as a European scout.

But he felt there was something missing.

“I noticed very early on that I’m not going to be able to pitch all year round. I tried playing winter ball and I just felt like there was something missing from my year,” Prinstein said. “If I’m playing ball all year, I wanted to have an opportunity to elevate my mind and work on a different part of my personal growth.”

Prinstein settled on studying law and wanted to find a school that would accommodate his busy schedule.

“For me, the condition was I would go to that law school if they understood I had a professional baseball career,” he said. “So that means coming in late after the semester started and leaving early for spring training.

“The only one that was OK with that was Detroit Mercy. I definitely respect that they let me do that.”

There was also a family connection for Prinstein; his father, Jay Prinstein ’73, earned a bachelor’s degree at the University.

Prinstein compared his setup — balancing a professional baseball playing and scouting career and law school — to having two full-time jobs.

“I had a pretty interesting setup where I’d take my exams proctored overseas and come late. It was hard; there’s no way around it. I’m training at 6 a.m. in the morning, then going to class and coming back and training some more and doing law school work.”

Though Prinstein doesn’t practice law, he says his experience at Detroit Mercy has been helpful as he follows his passions.

“The tools I learned in law school definitely helped me in my career in baseball and in running a nonprofit. I do so much paperwork on the legal side of things,” Prinstein said. “The way I think strategically, these are a lot of the skill sets I developed through my education at Detroit Mercy Law.”

Climbing the ranks of professional baseball

Shortly after earning his law degree at Detroit Mercy, Prinstein’s baseball career received a big boost when he was hired by the Baltimore Orioles to be the organization’s supervisor of Europe.

Another promotion soon followed: Prinstein was elevated to a major league scouting role with the Orioles at the conclusion of his playing career.

As a major league scout, Prinstein evaluated players across multiple levels of baseball to help the Orioles in free agency and trades. He also provided advance scouting as the organization prepared for upcoming opponents, including the 2014 postseason matchup against his hometown Detroit Tigers.

This past winter, after eight seasons with the Orioles, Prinstein returned to the Midwest, joining the Cincinnati Reds as an international crosschecker. He works with scouts in the Reds organization who are located around the world and evaluates players based on their recommendations.

“I’m sort of like a conduit between the area scout and the front office,” Prinstein said. “I’m in charge of some territories, but it’s more just making sure that the area scouts, what they’re saying checks out. I have a director above me in the front office in Cincinnati and he’s basically making the final decision on players, but when I go out on the road, I’m sort of like his eyes and ears.”

Prinstein’s professional baseball career has taken him across the world, but his heart remains in Detroit with International Stars.

Prinstein hopes to one day develop a year-round complex in Detroit for International Stars to extend their time with the children they’re impacting. There’s also a global arm of the organization, which helps international athletes pursue collegiate baseball opportunities through showcases and tournaments.

However, the COVID-19 pandemic has halted these initiatives. A timeline for resumption is unknown.

Most of the long-term plan for International Stars remains intact, Prinstein said. They’re still fundraising to build the complex, and plan on returning to programming when deemed safe and appropriate.

“Our work is just beginning in these challenging times that lay ahead,” Prinstein said.

Baseball is more than a game to Prinstein. It helped him get an education, opened professional doors and empowered him to become a mentor. He sees first-hand how the children in International Stars programming use it as a “vehicle” to a better future, and is thankful to be able to have a positive impact.

“That is sort of what I’m looking to provide with the academy, and I think, even if we help just one kid and change one kid’s life, it’s worth it,” Prinstein said. “And we’ve already changed so many. It makes us encouraged to keep going with it.”