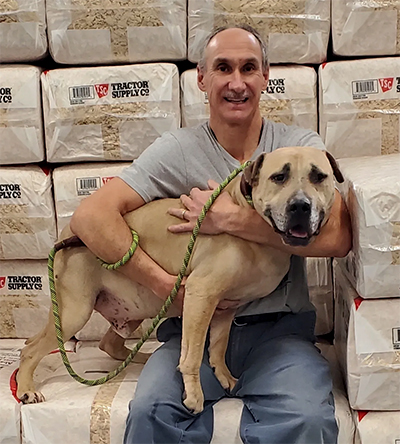 Dan Egeler ’86 wanted to do something in 2020 that would challenge himself both mentally and physically. But if the University of Detroit Mercy School of Law alumnus was going to do some sort of “crazy” competition, he wanted it to benefit a good cause.

“By doing the four marathons, I thought there would be a wow factor that would enable me to hopefully raise some good money for these worthwhile groups,” Egeler said.

Egeler will start and finish the Waggin’ Bark Race at his Dexter home, departing at 1 p.m. Oct. 24 and returning 24 hours later after completing all 104.875 miles.

His goal is to raise $50,000 to benefit the two organizations.

For Egeler, the event is all about pacing. A run of this distance will be uncharted waters for the man who started running just two years ago. Egeler participated in his only marathon, the Detroit Free Press/TCF Bank Marathon, last fall, and his training for the Waggin’ Bark Race has been similar. He runs 3.7 miles three to four times per week.

“I’ve done a couple of pace runs just to establish what type of distance I can cover in a certain time period, because the secret of completing the four marathons in 24 hours is not going out and running four marathons, it’s going out and doing a good pace, combining with some walking, to make sure I can physically get through the entire event,” Egeler said.

When the event starts Oct. 24, Egeler won’t be taking breaks between marathons, and he won’t be running every single mile. But he won’t stop moving during the 24-hours.

“The concept is I’m always going to keep moving so I can get the miles in,” Egeler said. “But, from my world, if I were to go out and try to run a marathon and then rest a little bit, and then try to run another marathon, I probably wouldn’t be able to finish it. What would happen is the body would burn out too much, based upon all the running, and I wouldn’t be able to accomplish it.”

Egeler started to plan the Waggin’ Bark Race in January, evolving from an idea in his head to a structured event. It was originally going to be a 100-mile run, but Egeler thought that doing four marathons, which increases the overall mileage total by only 4.875 miles, was more exciting.

The months-long process has consisted of determining safe running routes, ensuring the group of supporters accompanying him throughout the event, known as his “pit crew,” would be safe and securing a location to run at night without vehicle traffic. The COVID-19 pandemic and shutdowns have also affected planning and locations Egeler could use after sunset.

“I’ve been thinking about it since January, so I’ve got a lot of ideas,” he said. “It’s just a matter now of scoping the route that allows me to get to the four-marathon distance or more.”

“Dogs are great companions,” Egeler said. “They unconditionally love us, give us attention and don’t ask for a lot in return. They’re great to have around and we all enjoy them. It’s easy to love dogs. The fun part about both of these charities is that they work very hard to get dogs in a situation where they can be loved by others.”

To learn more about the Waggin’ Dog Race, visit its website at wagginbarkrace.com.