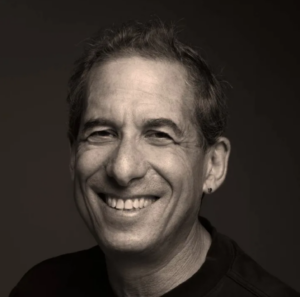 Scott Haas ’82 is a writer and clinical psychologist based in Boston. He writes a monthly jazz column for The Bay State Banner, a weekly publication that reports on Boston’s Black community, and is the author of a new book, “Why Be Happy? The Japanese Way of Acceptance,” released July.

Detroit Mercy’s Marketing & Communications Department recently spoke with Haas about the nature of happiness and ukeireru, the Japanese art of acceptance that he explores in his new book.

Q: We’ll start off with an obvious first question: What is happiness?

Haas: There’s the immediate and there’s the lasting. The classic example that psychologists talk about is that you have two choices. One choice is that a friend calls you up and says, “I’ve got a pair of tickets to this amusement park. Why don’t we go and spend the day there?” And you go and you have an incredible time. … So, you’re really happy, right? The second way of happiness is that you have an elderly aunt, and you just love her to death. … She calls you up and says, “Would you come over and help me out a little bit around the house? I’m kind of frail, and while you’re here, we could have a little lunch together, and maybe you could read to me because my eye sight’s shot.” So, you go over there and you spend a few hours and you’re really taking care of her.

What psychologists talk about is that the second one is more likely to last because it’s such a beautiful thing you were able to share — taking care of somebody — whereas the amusement park was just about you. It was a lot of fun, but fun is not necessarily the only component of happiness. One of the major components of lasting happiness, as any parent would tell you, is being able to take care of someone who needs you. 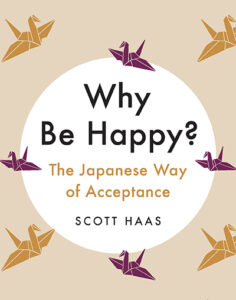 Q: Why should people be happy, then?

Haas: It depends on what they want out of life. When I used to go to basketball games, I felt really, really happy. And it was just the best way to have a Thursday night; I’m out with my friend, Fred, he and I are at the game and we’re having dinner before. It just makes up for all of the things that happened during the week. And for two hours, all the stresses in my life are gone, I’m just focused on the game. That’s all I’m interested in. And so, it’s nice to get out of your head, it’s nice to get out of the things that stress you out. Happiness is a way to get rid of stress. So that’s why we need to be happy.

But the question is, how do you make happiness last, and what is happiness, really? For the last few months, since March, I don’t know a lot of people who are walking around really happy. Part of the challenge is leaving aside loss of work, loss of family members and things like that, it’s also the social isolation — you can’t do the things that you want to do. So how do you create happiness for yourself in situations like that? What I have found to be good is trying to be of use to others. There’s almost always someone who’s worse off than you are or I am. So, I’m doing everything I can to spend part of my day being of use to others. And that makes a big difference because our communities are based on individuals who do that, whether you’re in the police department, fire department, driving a bus during a pandemic. Those people are taking chances, and they’re taking those chances not for personal happiness but because it makes others around them happy.

Q: How does someone know, in that moment, if they’re happy?

It’s like when you’re with someone you love. If I’m with my wife, in our best moments, I’m thinking, I just love being here with her, I just really like this a lot. I’m just thinking about how lucky I am to be with someone I care this much about. It’s just a really good feeling of being of the moment; you’re not thinking about anything else other than being right there. You’re fitting in to what’s around you, and that’s a very Japanese thing, in a sense. Their goal is based on two things: One is how do we find out what nature expects of us, and having figured that out, how do we fit in with that expectation? When we can figure out those two things — and figuring that out is not permanent, it changes every day, every moment — that’s what makes us happy. Primarily, it’s also really truly thinking about others, trying to be of use to others.

Q: Have you found that happiness is different for everyone?

Haas: The things that make me happy may not make you happy, but I think that, on a practical level, the things that make me the happiest are taking a walk, running, cooking, reading, writing — that’s about it. But then you want to add to that, because there’s other things. I used to love going to see a game, but I can’t do that right now. I love listening to music; I know people who just don’t feel that. So, it’s really a question of what happens to one of us when we are experiencing happiness? There are people who love gardening. I don’t get it, I don’t understand why people love gardening so much. But when my wife’s out gardening, she’s just really happy. And I think she’s happy because she’s not thinking about herself. She’s a doctor. She’s not thinking about taking care of patients, and she doesn’t have to worry about them. She’s just worried about the planting. So, whatever gets you out of your head is what makes you happy.

Q: Your new book explores ukeireru, the Japanese art of acceptance. What led you to explore this topic?

Haas: When I was a teenager, I saw a movie called “Rashomon.” It was a story about a terrible incident that took place in Japan. What I loved about it was it showed different perspectives. So, I started reading a lot about Japan as a teenager. I dropped it all and had no interest in Japan until about 2002, and this famous chef in New York invited me and two other writers to join him in a “Lost in Translation” free trip to Japan. The four of us went with his restaurant crew, and we stayed in the same hotel where they made the movie. And I had no desire to go to Japan, none at all. Zero. And I get there and it’s like, “Holy smokes!” It’s a really interesting place. And it brought back all of the interesting things I thought about as a teenager, and how different it was and how they’re able to see different perspectives. And while I was there, and over the last 18 years or so, I was really, really lucky to develop friendships with people there. And they taught me a lot about this idea of accepting a situation and not being reactive to it. And they don’t mean acceptance in the sense of resignation — they have another word for that. Ukeireru means that we have to accept the situation for what it is, be realistic about it. We don’t have to respond to it. But having accepted it, we can decide then if we want to continue being part of it, or whether we want to change it. But the first step is to say this is what’s happening. And even today, I’ll go there once or twice a year. I’ll see a friend who is a close friend at this point after 16-17 years. I haven’t seen this person in forever, like six months. And we’ll just sit there for about a half an hour and no one will talk. The idea is called “reading the air;” it’s a Japanese expression and it means you’re supposed to feel what the other person is feeling without them putting it into words. The more time I spent in Japan, the more time I thought the strategies that they have, they’re fun to add to what we have here. What we have here is a lot of people with opinions, a lot of can-do spirit, a lot of individualism, and frankly, the Japanese could really benefit from those things, because they tend to work in a group. But when I think about the benefits of what Japanese culture has brought to me here, that’s how I got interested in it. I thought, “Well, here are some things from Japan that I can add to my life that make my life a whole lot less stressful.”

Q: What are some simple things people can do every day to build happiness?

Haas: I would say there’s a couple of practical things and there’s some broader things. I’m a big fan of taking a nap sometime during the day if you can possibly do it, and I recognize not everyone can pull this stunt. But if there’s some point during the day, even for five minutes, where you can just tune out, close your eyes and say, “I’m just not doing this,” that goes a long way to letting things go. Another thing you can do is just basically slow down your activities. If you’re having coffee, having tea, you’re cooking — do it slowly. Take the time to do things. Understand that the process of doing what you’re doing is the outcome in so many ways. It’s the practice of things that matters more than the outcome. You talk to anyone who’s a musician, plays sports, is a physician, they keep talking about practice. Practicing what you enjoy doing makes a big difference.

On a philosophical, broader level, again, being of more use to others. If you have a family member who you haven’t spoken to in a while, someone you really care about — I don’t mean someone you have an estrangement with — but someone you feel like, “I should probably call my aunt. I should call my uncle.” Go ahead, do it. Be of use to others. And that makes a huge difference.