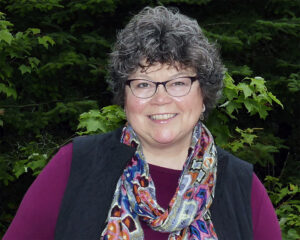 For Kath Usitalo ’76, summer vacation as a child growing up in metro Detroit meant one thing: Making the trip north to spend time with family in Michigan’s Upper Peninsula, where her parents were born.

“We actually didn’t do a lot of touristy things,” Usitalo said. “We had picnics and beach time, saw some waterfalls. We would pick wild strawberries and just hang out. We did go to Brockway Mountain Drive, mainly because it was on the way to my aunt and uncle’s cabin on Lake Superior. My mom’s sister married a dairy farmer and I loved staying on the farm with those cousins in the little mid-peninsula town of Rock. We would go to the U.P. State Fair, play in the hay barn, swim at a nearby inland lake, went to sauna. Simple stuff.”

So, when Usitalo moved to the Upper Peninsula full-time in 2014, writing a book on the area “seemed like the next step” for the University of Detroit alumna. 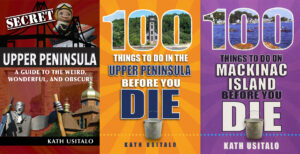 “When I first started freelancing there were a lot of magazine and newspaper outlets for travel stories. I also contributed to guidebooks,” she said. “As those markets started drying up, I was thinking about self-publishing a book about the U.P.”

“When I learned about Reedy Press I pitched the U.P. for their ‘100 Things to Do’ series,” Usitalo said. “With ‘100 Things Mackinac Island,’ I wanted to let people know that there’s more to do there than sample fudge and ride a bike. Next came ‘Secret Upper Peninsula,’ because I love the ‘weird, wonderful and obscure,’ and there’s lots of that in the U.P.”

Usitalo graduated from University of Detroit with a degree in Communication Studies. She worked in Michigan’s tourism industry and was vice president of communications for the Detroit Metro Convention & Visitors Bureau before leaving to become a freelance travel writer.

“I ended up specializing in Michigan because I could easily explore the state with two little kids,” Usitalo said.

Over the years, Usitalo has produced Michigan-related content for various publications and edited Experience Michigan Magazine, which stopped publishing due to the COVID-19 pandemic. In 1996, she launched the Great Lakes Gazette, which explores things to see and do in Michigan. It started as a print publication but now lives online at greatlakesgazette.com

“I wrote and my husband, Tom Kozak ’75, illustrated it, with contributions from our son Graham and daughter Paige,” Usitalo said.

Usitalo was “pretty familiar with the region” beforehand, given her background, but “did discover some great material in researching the ‘Secret U.P.’ book.”

“Historical events, people and places, like the trial at the Marquette County Courthouse in 1913, when former president Theodore Roosevelt sued the editor of a local newspaper for libel,” she said. “Just south of the gorgeous Pictured Rocks there’s a miles-long, eerie landscape called Kingston Plains. It was a pine forest until it was logged out in the late 1800s, and now it’s just a stump prairie. The writer Jim Harrison had a cabin near there and included mention of it in his novel ‘True North.’ ”

Usitalo offers several recommendations for those looking to visit the Upper Peninsula or Mackinac Island for the first time.

“Although Mackinac Island is part of the Upper Peninsula, they are two different worlds. I encourage everyone to spend at least one night on Mackinac Island, to experience it after the last ferry leaves and as the island is waking up,” Usitalo said. “You need time to get beyond the two main streets, to see the fort and other historical sights, ride a bike around the island, of course, hike the miles of trails, check out the Victorian cottages. The U.P. is huge, and there’s a lot of wilderness that can be as rugged or accessible as your interests and abilities allow. You can take a paved path to a waterfall or hike challenging trails. The Keweenaw Peninsula is my favorite place for its copper mining history, the beautiful shoreline and its remoteness. People don’t realize how long it takes to get from the Mackinac Bridge to Copper Harbor, so it’s important to allow plenty of time to explore and to just do nothing but sit and appreciate the scenery, the lakeshore and the night sky.”