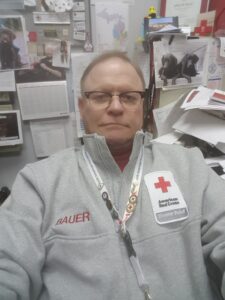 Jeffry Bauer ’80 originally took a class with the American Red Cross to get a tenant to stop pestering him. That led to volunteering with the Red Cross for 37 years and recently, the University of Detroit Law graduate was named the Chief Operating Officer for the Michigan Region.

“Never,” Bauer said when asked if he thought one day he would be COO of the Michigan Region of the Red Cross. “At no time in my life did I ever envision I would be a volunteer for the Red Cross. That never crossed my mind.”

Bauer was a judge advocate in the U.S. Navy after graduating from law school in 1980. After his stint in the Navy he returned to Detroit and owned a duplex.

“The tenant in my duplex worked at the Red Cross in the Public Affairs department,” Bauer said. “She berated me to take classes and get involved with the Red Cross. Finally, I told her after several months, ‘If I take the class or do whatever it is that you’re trying to get me to do, will you leave me alone?’ She said, ‘Yes.’ So, I took the first class. The instructor of that class happened to be the disaster director and he said, ‘You should come back next week; we have another class in another area of disaster services.’ I told him once was enough, but he convinced me. I came back and took another class, then another class.”

Bauer had a successful career as an attorney, but always made time to volunteer with the Red Cross.

“Throughout my 37 years as a volunteer with the Red Cross, I’ve done things like serve as a service center manager after Hurricane Andrew in southern Florida in 1992,” Bauer said. “My service center dispensed over $7.52 million dollars of relief in the time I was there, which was about a two-month period.

“I also served as the worker in charge of the Northwest 255 air disaster at Detroit Metropolitan Airport in 1987. I have served, more recently, for 60 days as the disaster technology manager for the Midland dam collapse operation in Midland. I was responsible for all the telecommunication and computer equipment.”

Bauer said as he’s gotten older, his law career has tapered off and his Red Cross career has expanded. In his new position, he is no longer a volunteer and is a paid employee. He is second in command for the Red Cross in Michigan and responsible for managing approximately 35 sites.

Bauer said he’s been a volunteer in one shape or another his whole life and considers himself a humanitarian at heart.

“The mission of the Red Cross is to alleviate human suffering caused by natural, manmade and technological disasters, so the mission of the Red Cross is not much different than the Jesuit order of the Catholic church or the mission of Detroit Mercy,” Bauer said. “I’ve been in training for this all of my life. I’m a graduate not only of the University of Detroit, but also Boston College. Being of assistance to others is something that has been a part of my Jesuit training, my training as a lawyer and my training as an American Red Cross disaster responder.”

Bauer credits his time in law school for helping him not only become a successful lawyer, but also teaching him about life.

“I certainly learned a lot from certain professors at the University of Detroit,” Bauer said. “Such as the late Patrick Keenan, who taught me trial practice, taught me how to be a trial attorney. Professor Lawrence Dubin, who taught me evidence and professional responsibility. They helped me not only be a good lawyer, but be a better person.”

Bauer has been practicing law for 39 years and even with his new position with the Red Cross, he doesn’t plan to completely stop.

“I still serve as an arbitrator and a meditator as community service to the securities industry and the commodities industry,” Bauer said. “I’m now a certified communication unit leader with the United States Department of Homeland Security. I’m also a communications technician and an auxiliary communication manager for the Department of Homeland Security. I still serve as an emergency operations center liaison to the Selfridge Air National Guard Base, United States Navy, United States Coast Guard, the county of St. Clair, the county of Wayne and the city of Detroit.”

Bauer said his time with the Red Cross has been very rewarding and he always encourages others to get involved.

“At the American Red Cross we are always looking for volunteers,” Bauer said. “And we’re always looking for blood donors, particularly in the COVID-19 era that we’re in now. People that have recovered from COVID-19 have antibodies and we’re taking what we call convalescent plasma from people who have recovered from COVID-19, which helps other people who are suffering from it.”